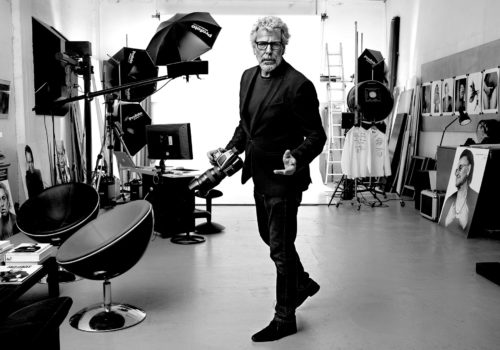 For more than forty years, this portraitist has rubbed shoulders with some of the biggest French and international stars. From Sting to John Malkovich, Alain Passard, Samuel Le Bihan or more recently Francois Hollande, all of them have one day walked through the door of his Parisian studio to come out with an instinctive image from which emanates the incredible emotions that Stephane de Bourgies knows how to capture so well.

It all started very early for the photographer. He was only 16 years old when he met the Italian stylist Nino Cerruti, who commissioned him to photograph his entire collection. Chanel and Saint-Laurent would follow, but it was mainly through photographer Henry Coste that the young artist made a major breakthrough in his work: his mastery of portraiture, especially black and white.  Barely 23 years old, Stephane de Bourgies thus began his work around this technique. It was not only going to become his signature, but also offered him immediate success.

Although he sees life in black and white, he is optimistic and always smiling, despite the extremely difficult moments that have marked his life, especially in recent years. Sincere, Stephane is also very endearing and very sensitive. He is interested in people and uses his camera to capture their most intimate emotions, giving these moving portraits a very special strength.

Stéphane de Bourgies : The images of Jeanloup Sieff. He was the first photographer who inspired me and made me want to take pictures.

Carole Schmitz : The man of images that inspires you?

Stéphane de Bourgies : Without hesitation I would say equally Richard Avedon and Irving Penn. For me, there are them and then the others. What emanates from their respective work is dizzying, the simplicity of the background of their studios, this magic in the direction of their models, it’s amazing. In the photo, there is no sound and no smell, so the only thing left is the outline, the lines, the shapes and the look of course.

Carole Schmitz : The image you would have liked to make?

Stéphane de Bourgies : The portrait of Karl Lagerfeld by Mondino who is the French photographer I admire. In this image Karl Lagerfeld is totally offbeat which gives it all that power.

Carole Schmitz : The one that moved you the most?

Carole Schmitz : And the one that made you angry?

Stéphane de Bourgies : I’m not a man who feels anger in general, so no photo makes me angry. Some may at most disappoint me… because whoever made them could have done better.

Carole Schmitz : The quality needed to be a good photographer?

Stéphane de Bourgies : What does it mean to be a good photographer? The criteria vary depending on your “specialty.” To be a good portraitist for example, I think it is necessary to be open to others, to be curious, to listen and to be comfortable whoever the person in front of you.

Carole Schmitz : The secret of the perfect image, if it exists?

Stéphane de Bourgies : It’s very subjective, because the perfect image is not the same for everyone. As far as I am concerned, I would say that there needs to be a balance, that the image holds and that a real energy emanates from it.

Carole Schmitz : The camera of your beginning?

Stéphane de Bourgies : Around the age of 11 I had an Instamatic Kodak. Then around 14 I received a Lubitel 2, a Russian camera, and later a Zenith which was also a Russian camera.

Carole Schmitz : The one you use today?

Stéphane de Bourgies : Since 1983, when I opened my studio, I am very attached to the Hasselblad. Of course over the years I went from film to digital. This is the camera that went to the moon and then was found in all the biggest studios around the world. It’s the Rolls of cameras, it’s mythical!

Stéphane de Bourgies : If I believe what is said about me, it would be resilience and altruism.

Carole Schmitz : An image to illustrate a new banknote?

Carole Schmitz : The job you wouldn’t have liked to do?

Carole Schmitz : Your greatest extravagance as a photographer?

Stéphane de Bourgies : All those personalities I would have loved to photograph such as Karl Lagerfeld, Johnny Halliday, Ray Charles and many others.

Stéphane de Bourgies : Instagram. I post a lot and I find it an interesting tool when used intelligently.

Carole Schmitz : If God existed would you ask him to pose for you, or would you opt for a selfie with him?

Stéphane de Bourgies : I would obviously ask him to pose for me.

Carole Schmitz : The image that represents for you the current state of the world?

Stéphane de Bourgies : The blank page, because with it anything is possible