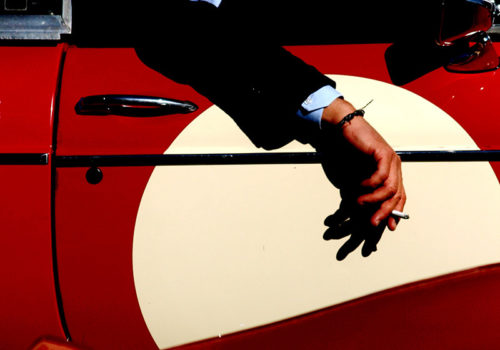 A figurative approach to photography

Photography was originally a passion for Eric Houdoyer before taking a prominent place in his life. Specialized in “Street photography” and making the street his theater, he is constantly on the lookout for the next image to capture. Reactive, precise, his images could be similar to Hopper’s paintings. He attaches importance to the graphic and contrasted aspect of the images in which the human presence melts into the material environment. He knows how to sublimate urban elements through composition and geometry. His real subject: light which becomes his creative stake. His play of shadows allows him to sketch a universe without faces, where the touches of light structure the image.

Eric Houdoyer : Exit from the Grand Palais about 6 years ago.

The image you would have liked to make ?

Eric Houdoyer : The photos of hunters in the reserves with a triumphant smile in front of their victim in a thousand pieces.

A key image in your personal pantheon:

Eric Houdoyer : the one that would make me stop taking pictures.

Eric Houdoyer : I don’t know any.

Eric Houdoyer : Coffee in the middle of my photo journey.

Eric Houdoyer : Photography and cycling, recently I discovered how to do both at the same time.

Your biggest extravagance as a photographer ?

The values you wish to share through your images ?

Eric Houdoyer : Creativity in the heart of reality.

The place you never get tired of ?

Eric Houdoyer : My only photo course.

Eric Houdoyer : Not to have been Maradona.

If God existed, would you ask him to pose for you, or would you opt for a selfie with him ?

Eric Houdoyer : I would pose for him.

What is missing in today’s world ?

What if everything had to be redone ?

Eric Houdoyer : All or nothing.