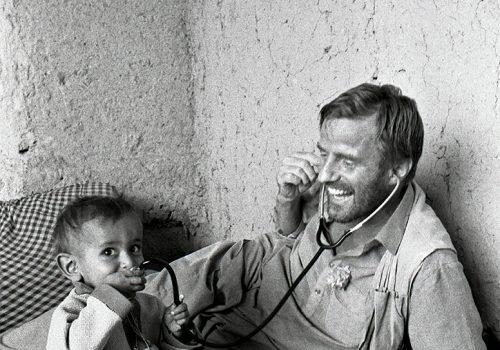 Because this quote from Ernest Renan is taken from the remarkable work of Olivier Weber, which traces the epic of the pioneering “French doctors”, at the initiative of Bernard Kouchner since the tragedy of Biafra in 1969 with the creation of “Médecins sans Frontières ”of “ Médecins du Monde ”and of many others.

In the 1980s-90s, companion of Bernard Kouchner, co-founder of MSF “Médecins sans frontières”, José Nicolas was more than an essential witness of the right to interfere in Lebanon in 1982, in Kurdistan in 1984, in Afghanistan in 1987, with the “boat people” in the China Sea in 1989.

He is a very seasoned photographer, through his past as a paratrooper in the marine infantry,exemplary soldier he has always wanted,  in solidarity with the victims, to wage war on indifference, silence, oblivion, facing populations. on the verge of survival.

The flow of migrants, who are reaching Europe today, the multiplication of conflicts raging in our world, in a crying deficit of humanity, make images of José Nicolas, all imprints of humility and modesty, the reminder of ” decisive moments ”dear to Cartier-Bresson, of our humanitarian past.

José Nicolas’s exhibition here is more than a balance sheet: a perspective and a lesson of all kinds to never succumb to “compassion fatigue”. All the images of José Nicolas demonstrating the context of putting into practice the “duty to interfere” as hoped again in today’s Lebanon on the brink of the abyss – are reasons to be more united than ever in our societies subjected to the dangerous thrusts of extremes, religious or communitarian threats.

It is a journey through an odyssey, that of castaways on land and at sea, of cohorts of victims or exiles of coercion. To better enable us to measure the historical achievements of all these “French doctors”, doctors of the world, nurses, volunteers who, like the 6 members of ACTED – who paid with their lives last August 19th in Niger their commitment to this organisation. latest international solidarity association.

May this exhibition make the gaze of each visitor “a redemption and a victory over our human condition by chasing, in front of each image, the spectre of the violence which is destroying it and always revive the hope… ..” The one that women and men doctors of the impossible give us to live, following the advice of Albert Camus “True generosity towards the future consists in giving everything to the present”

We are all “peace watchers” who, at each exhibition, take our turn.

To better keep us vigilant in the present and preserve the future. An original exhibition, as an essential contribution to the memory of our time.

Born on April 4, 1956, in Casablanca, Morocco, José Nicolas began working as a photographer for a regional daily before becoming involved with humanitarian organizations such as Médecins du monde, leading him to follow the epic of French Doctors. Bernard Kouchner in his missions around the world: Kurdistan, Afghanistan, the Lebanon Sea. Since 1996, José Nicolas has been a freelance photographer. He continues to report for local, national and international magazines on religion (Egypt, Ethiopia, Jerusalem), or the environment (Guyana). In 2014, the NGO “Entrepreneurs du monde” gave him a mission in Haiti to testify on the ground on micro-credit, and to take a look at reconstruction.

Exhibition presented from September 18 to November 15, 2020

At the end of the exhibition, the Arsenal boutique and its L’Art Scène bar welcome you during the Gallery’s opening hours.