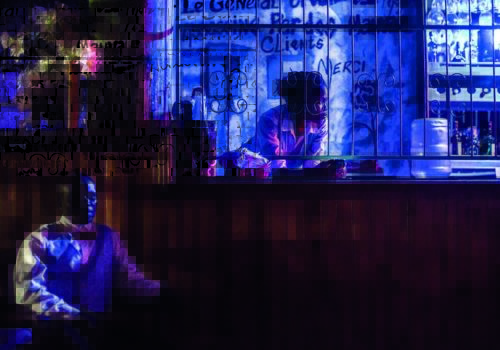 This sentence sums up the contradictions of the small country Haiti. For this series of photographs and the accompanying book, I have drawn on my archives: 10 years of traveling across the island. After 24 trips, I know (almost) every nook and cranny of a country so complex to understand. But it is in the images of cities that I have extracted unpublished works.

Haiti fascinates by its history, but dazzles with the flamboyance of its colors. It is everywhere: a magma of hues immersed in India ink, diluted along the sidewalks, creeping (time) along the walls, underlining with its force the Haitians’ appetite for life.

Only colored is a statement made to Haiti’s chromatic richness. ”

With this new series of photographs of Haiti, Corentin Fohlen plunges us into a bath of colors that are certainly greasy, muted, washed out, but also striking, contrasting, illuminated. Here, none or few natural colors, none, but plastered, painted or worn colors, which collide in an astonishing communion. Playing on this powerful ability to communicate through his often offbeat eye, the seasoned photographer finally leads us to his true goal with the jubilation of a child dipping his fingers in the paint bucket. He highlights the actors of this exotic and colorful scene: women, men and children who evolve within this setting, in a vital energy.

Corentin Fohlen was born, lives and works in Paris. Independent photoreporter since 2004, he is distributed by the Divergence photographers association. From 2012, he embarked on long-term work in Haiti, a country in which he made about twenty stays. Showing another image of this island far from the miserable clichés often associated with it, he explores the cultural and human richness with a reflection on the consequences of international control.

Winner of several prestigious awards including the Visa d’Or for Young Reporter in Perpignan in 2010, two World Press Photo Awards in 2011 and 2016, the AFD-Liberation Best Report Award in 2016, two Sony World Photography Awards in 2015 and 2018, Corentin FOHLEN has exhibited his work in many countries including Haiti.

His “Karnaval” series was the subject of an exhibition at the L’ANGLE gallery in 2018.

The “Only colored” exhibition is accompanied by the eponymous book published by Photopaper in 2020.