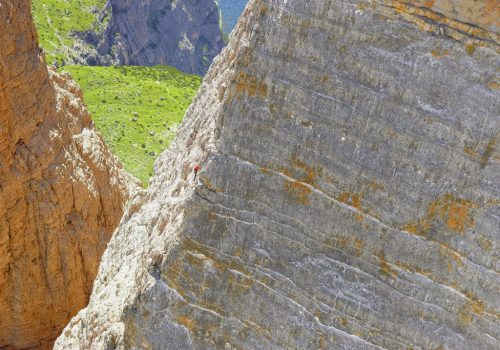 In the heart of the Dolomites, the Lagazuoi EXPO Dolomiti is hosting the images of the Lagazuoi Photo Award 2020, with the exhibition by Olivo Barbieri, the winner of the first edition of the contest. The photography contest is the first curatorial project of Lagazuoi Expo Dolomiti, the exhibition and cultural centre next to the top station of the homonymous cable car, at 2,778 metres a.s.l. The contest aims to pose a challenge to photographers, professionals and amateurs alike, who are called to create shots revealing the emotion of the Dolomite world with no cliche.

Indeed, authors are invited to renew the iconography of the Dolomites, among the most photographed mountains in the world, with unconventional shots. An arduous task and a fascinating one, recalling a sense of the sublime as well as the vertigo of the vastness of the spaces. As John Ruskin wrote: “…mountains are the great cathedrals of the earth, with their gates of rock, pavements of clouds, choirs of steam and stone, and altars of snow….“.

The contest finalists are Daniel von Johnston, Alex Majoli, Attilio Maria Navarra and Beatrice Speranza. Olivo Barbieri, the winner, immortalized the Dolomites revealing them in a very different perspective, far from a purely documentary dimension. The images by Barbieri are part of the monographic work Dolomites Project 2010: a series of photographs and a video, characterized by the same effective use of depth of field. The jury of the Lagazuoi Photo Award 2020 is composed of Denis Curti, Mario Calabresi, Nathalie Herschdorfer, Andréa Holzherr, Susanna Tamaro and Stefano Illing.

“The project stems from a lack of representation: mountains are more and more accessible and photography is more popular than ever. Yet, new technical opportunities (e.g. digital devices), didn’t manage to renew the way we look at the territory”, Stefano Illing explains.

The Lagazuoi EXPO Dolomiti (totally accessible) has a surface area of 2842 ft² over three floors connected by a panoramic elevator; it can be reached thanks to the fast cable car departing from the Falzarego Pass on the Road of the Dolomites.

Lagazuoi Photo Award and the Dolomites Project 2010 by Olivo Barbieri

The Lagazuoi EXPO Dolomiti, between Cortina d’Ampezzo and Alta Badia, can be reached with the Lagazuoi cable car departing from the Falzarego Pass, on the Great Dolomites Road (SS 48)