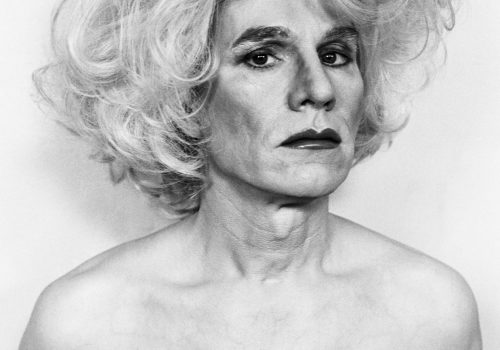 It´s 1981. Pac-Man is introduced in the US and John Hinckley tries to assasinate president Ronald Reagan. Blondie releases their Billboard no. 1 hit single ”Rapture” and at the Institute for Art and Urban Resources (P.S.1) Diego Cortez curates “New York/New Wave” with works from Jean-Michel Basquiat and Robert Mapplethorpe among others.

It´s 1981. Andy Warhol is to be 53 years old later in the summer. He and his old friend Christopher Makos visits an elegant wig shop in the 57th Street. The two friends heads off to the photo studio with eight wigs. 48 intense hours and 349 images later the result – Lady Warhol – is completed.

Christopher Makos was born in Lowell, Massachusetts, grew up in California, and moved to New York after high school. He studied architecture in Paris and briefly worked as an apprentice to Man Ray. Makos and Warhol became good friends in 1971. They traveled together extensively and completed several projects together. For example, Makos was the art director for Warhol’s first book entitled ”Exposures” (Grosset & Dunlap, 1979).

Lady Warhol is Makos’ interpretation of Man Ray’s collaboration with Duchamp. But while Man Ray’s images were a play on, Duchamp’s character, Sélavy’s mysterious persona, Makos, in his depiction, sought to instead exaggerate Warhol’s pale fragility.

”Andy and I were relaxed enough to let his grace and his awkwardness show. I see in these images openness and vulnerability and Andy’s need to express himself. These were parts of Andy that he rarely exposed in public, but I remember them well.” explains Makos.
Magnus Naddermier

In connection to the exhibition there will be a screening of Ronald Nameth’s documentary about Warhols legendary multimedia show ”Exploding Plastic Inevitable” (1966-67)
The exhibition is produced by La Fábrica in Madrid.