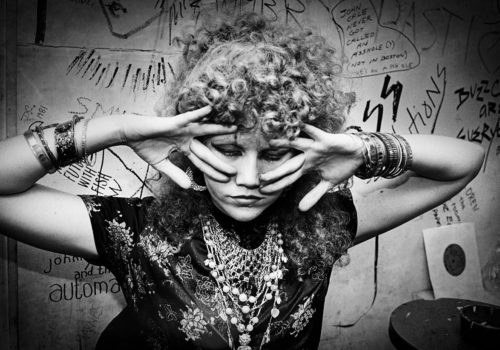 La Térmica Museum in Málaga, Spain, presents the multi-media exhibition “Days of Punk” by American photographer Michael Grecco, who is based in Los Angeles, CA. The show presents more than a hundred black & white and color photographs of artists including Johnny Rotten, The Buzzcocks, Talking Heads, Human Sexual Response, Joan Jett, The Clash, The Cramps, David Bowie, and the Ramones, among many others.

The images featured in Days of Punk date back to the late ‘70s through early ‘90s, when photographer and filmmaker Grecco documented the nightclub and concert scenes in New York and Boston. At that time, punk exploded in the U.S. and later morphed into post-punk and new wave movements. Down and dirty in the thick of things, onstage and backstage, Grecco captured for posterity a riotously outspoken time in pop culture history, with all its raw energy, emotional power, and outrageous antics.

Born in New York City, Michael attended college in Boston, Massachusetts, where he began his professional career shooting for the Associated Press and covering the music scene for the legendary radio station WBCN-FM. It was the heyday of punk rock’s arrival in the U.S. While he was shooting at concerts and in nightclubs as a working photographer, Grecco – a self-described “club kid” of the time – had a unique opportunity to embed himself in this revolutionary scene as both a chronicler and a participant.

After these punk images sat dormant in flat files for decades, Grecco and his archivist decided to revisit them. Their efforts lead to his latest book, Punk, Post Punk, New Wave: Onstage, Backstage, In Your Face, 1978–1991 (Abrams Books, 11/10/2020), and the accompanying multi-media exhibition, “Days of Punk.” The coffee-table volume features 162 previously unseen images – including backstage and onstage moments – that are available to collectors for the first time in exclusive limited editions. The book features a foreword by Fred Schneider of the B-52s and an essay by veteran rock journalist Jim Sullivan. Grecco’s personal anecdotes from his times hanging out with the musicians he was shooting add further depth.

These photographs are the centerpiece of “Days of Punk” and the show experience is augmented by soundscapes created in collaboration with members of the cult band Mission of Burma. A video component of the exhibition includes some archival footage that Grecco himself shot back in the punk era. The exhibition premiered at the international photography fair Photo London in 2021, and will subsequently travel the world, starting with its installation at La Termica, which is organized by La Termica, Diputacion de Malaga, and LaChrome®, and curated by Mario Martin Pareja. Images presented at La Térmica are printed by LaChrome Bespoke Printing on Ilford Gold Fibre Gloss paper.

La Térmica began its operations in Malaga in 2013. It is a contemporary cultural, creative, and production center based on an open and diverse approach that seeks to develop new perspectives on reality through culture and personal civic initiatives.