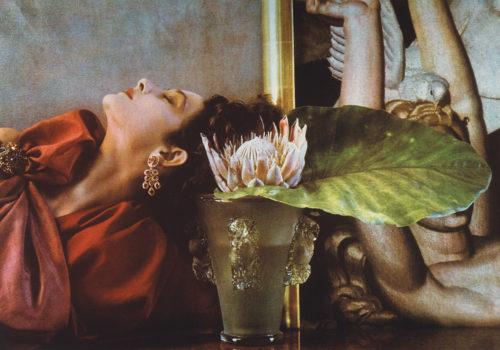 La Galerie Rouge presents until October 10 for the first time in France a personal exhibition of the American artist Sheila Metzner in partnership with the Helmut Newton Foundation in Berlin. True objects of desire, these flamboyant and pictorial images allow us to rediscover the original style of the photographer and the fashion world of the 1980s.

Sheila Metzner was born in 1939 in Brooklyn New York. Known primarily for her fashion photography, she also produced portraits, still lifes, landscapes and nudes. Throughout her career, Sheila Metzner never distinguished her personal work from her commercial work. After studying at the Pratt Institute (New York), from which she graduated in visual communication in 1961, she joined the advertising agency Doyle Dane Bernbach. In 1966, she became the agency’s first female director. In 1968, she married Jeffrey Metzner, also artistic director at Doyle Dane Bernbach. While pregnant with their first child, she confided in her mentor and friend, photographer Aaron Rose, that she was reluctant to give up her career in advertising. He advised her to become a photographer. The work of Julia Margaret Cameron, a 19th century woman photographer, inspired her to take photographs of her husband and children. Her family was also the subject of her first exhibition, entitled Friends and Family, which was held in New York in 1978 at the Daniel Wolf gallery. The same year, MoMa director John Szarkowski selected one of her photographs, entitled Eyvan and representing her husband’s daughter. This photograph appears in the exhibition Mirrors and Windows: American Photography Since 1960 held at the Museum of Modern Art in New York, before joining the permanent collections of the museum. After working for Vanity Fair, she became the first woman to collaborate regularly with Vogue magazine, at a time when fashion photography was then dominated by men Herbert Ritts, Sheila Metzner, 1990 (including Richard Avedon and Irving Penn). Alexander Liberman, editorial director at Condé Nast, supported her in her work as a photographer and sent her to take fashion photographs abroad, particularly in Africa and Italy. She worked for different brands throughout her career, including Ralph Lauren, Valentino, Fendi. She also photographed personalities, including David Lynch, Robert Mapplethorpe, Isabella Rosselini. In her early days, her interest in photography developed during her many visits to the Guggenheim Museum in New York, the Metropolitan Museum and the city’s photography galleries. Combining her work as a mother and that of a photographer, she took pictures during the day and developed her prints at night. Influenced by the pictorialist aesthetic practiced by Alfred Stielglitz and Edward Steichen at the beginning of the 20th century, she used the Fresson process (four-color direct carbon printing process developed by the Fresson family) for her prints. This allowed her to find the effects of blur and the grainy texture specific of pictorial photographs.