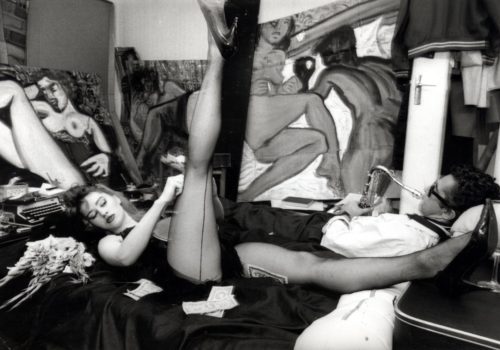 La Galerie Rouge brings together for the first time in a single exhibition the works of Marie-Paule Nègre and Luc Choquer, an emblematic couple of French documentary photography and founding members of the Métis agency in 1989.

Moments de Grâce refers to this common recognition of their photographic work which combines a subjective gaze, social testimony and happy coincidences. Marie-Paule Nègre thus speaks of the photographic medium: “The image also possesses this marvelous chance: it’s fantastic when in  a picture you have everything falling into place at a given moment, that’s what I call the moment of  grace. ”

Although Luc Choquer and Marie-Paule Nègre both subscribe to the tradition of auteur photography, they have always distinguished themselves with very marked and sometimes opposing aesthetic choices. Luc Choquer is known for his use of color and flash while Marie-Paule Nègre is often presented as a humanist photographer, working with a Leica, adept at instant, sober, black and white photography. However, the two photographers share a common taste for telling “people’s stories”, they believe in “awareness raising” photography and continually seek that magical moment where everything fits into the frame.

La Galerie Rouge has chosen to exhibit several series by each author in order to give an overview of their works.

Marie-Paule Nègre presents four series. For The Jazz in All Its States, produced from 1976 to 1978 between Paris and New York, the photographer followed great musicians such as Miles Davis, Cameron Brown, Count Basie, Manu Dibango and Dee Dee Bridgewater. In the 1980s, Marie-Paule Nègre began her series “Tales of modern life or ordinary misery”. An initial order from the Secours Populaire, this committed report presents the daily life of families helped by the association.

Luc Choquer presents three series characteristic of his critical, facetious and tender gaze. With Ruskaïa, for which the photographer received the Niépce Prize in 1992, Luc Choquer explored the Russia of Perestroika between 1988 and 1991. He tells about a country in transition through his portraits of Russian women, emblems of a youth eager for change. From the 1980s to the 2000s, Luc Choquer documented France and Paris through his series “Planète France” and “Les Parisiens”. His tender and sour gaze focuses on his contemporaries, both neighbors and strangers, encountered in the street, on the beach, at social gatherings or at the factory and even sometimes at home in their privacy. These portraits of France remind us of the people we meet on a daily basis and whom we think we know without realizing their incredible peculiarity.