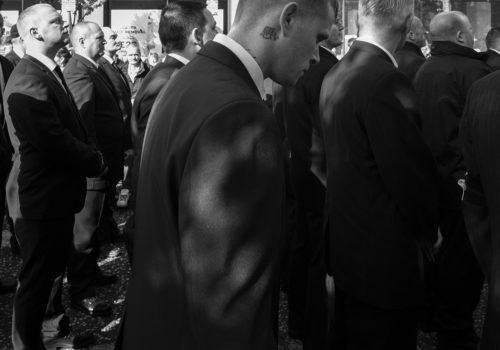 Our day will come
2012, the New IRA was formed in Northern Ireland. Stephen Dock decided to go to Belfast on the occasion of the centenary of the pact of Ulster celebrated by the unionists. The tension was palpable, but nothing was happening. The time for armed combat is over. The Good Friday peace agreements ending thirty years of civil war were signed in 1998. But souls are not appeased and the former belligerents live together in fragile peace.

In one camp as in the other, violence, cultural, social and political, lives and haunts individuals. It marks the faces of survivors and new generations.

With an even stronger influence than physical violence, it shapes behavior, is inscribed as an invariant transmitted from generation to generation. If the hatred between the communities has shaped the Northern Irish identity, it has also left a lasting mark on the territory. Life was created around the peace lines, the “walls of peace”, which appeared after August 1969. Present in the cities, they separate the inhabitants of the same district, sometimes on the same street.

The scars of war are everywhere. Large wall frescoes pay homage to the “heroes”, the painted messages warn the visitor that he is entering the stronghold of the Republicans or the Unionists. The walls speak. The tags mark membership to dissident groups, show support for prisoners, or denounce the feeling of colonization felt: Brits out!

The year was punctuated by parades, marches and bonfires, these bonfires made of wooden pallets that can measure up to thirty meters high, and on which the Irish flag or the Union Jack is burned. Each event is eminently political and marks the partition. The division is deep and it affects the smallest details of daily life. So, how to photograph this latent conflict that has pitted two communities against each other for hundreds of years? How to convey in images such a divided society?

To answer these questions Stephen Dock traveled to Northern Ireland for six years, making eleven trips. The photographer looks and tries to understand this inability to find the peace that he himself experienced. It constitutes a photographic corpus of materials and signs extracted from the daily environment: portraits, architectural details, street scenes… The traces, sometimes minute, left by the conflict are taken by the photographer to make them visible.

Constriction
A year ago, the Mulhouse prison, built in the 19th century near the city center, officially closed its doors and its 350 inmates, convicted or awaiting trial, were transferred to the new penitentiary center of Lutterbach. The buildings that were erected during the years 1865 to 1870, some time before the insurrectionary commune of Paris and the Treaty of Frankfurt which would fix the annexation of Alsace to the Germanic Empire, had first been used as a house center and then as a detention center before becoming a remand center in 1998.

A few months after its closure and the transfer of its last detainees in November 2021, Stephen Dock was able to access the empty and dilapidated establishment which had comprised two quarters for the detention of men, a quarter for women and one for minors, corridors, walking yards, classrooms and administrative, sanitary and technical premises. For several days, he carried out photographic work there, of which a dozen unpublished images will be presented at La Filature.

Stephen Dock has also brought together in a book thirty-six images of the same prison cell – of its four walls on which the eyes collide and of its cramped confinement space which bears implacable traces of the conditions of detention. Book 36 will be released in November 2022.

livre 36 co-published by Médiapop and La Filature, Scène nationale de Mulhouse
with the support of the European Community of Alsace; the Interregional Directorate of Penitentiary Services Strasbourg Grand-Est