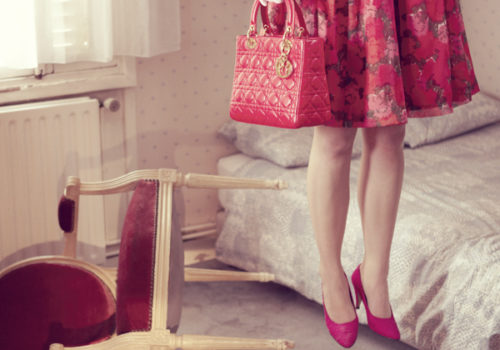 “The Lady Dior series projects a sense of ambiguity and pending calamity. The images are framed in such a way that the viewer can only glimpse at the subjects in a voyeuristic way. I am quite fascinated with staging my own death. By orchestrating and controlling my own suicides I confront directly the primitive and ageless mystery which haunts humanity, sublimating the obsessive fear oft he inevitable. As fort he Lady Dior bag’s iconic status, it lent itself easily tot he idea of a woman obsessed by the idea of keeping her most precious worldly possession with her, even in death.“

The four first images are from the Lady Dior “As Seen By” project, an exhibition that featured in 2011 in Shanghai works of internationally renowned filmmakers, photographers and artists, who were asked to create work inspired by the iconic Lady Dior handbag”. Artists include Tim Walker, Peter Lindberg, Nan Goldin, Martin Parr, David Lynch, Ruven Afanador, Ellen von Unwerth, Kourtney Roy or Maarten Baas…

Born in Canada, Kourtney Roy studied at the Emily Carr Fine Arts Institute. Kourtney wanted to become a painter, but after having taken a photography course, she realised that it was much easier to take a photo of something than to try and paint it. As it was difficult to find models, she began self-portraits at university, before pursuing fashion and art photography. Her work is influenced by many artists such as Jeff Wall, Stephen Shore, Francis Bacon and even Hitchcock. She lives and works in Paris. Her work is based on the search for the sublime and the extraordinary in ordinary environments. She is particularly attracted to the suburbs which are according to her, transitory places where people have the daily potential to live several realities. She has been influenced by Freud’s «The Uncanny», a concept which reveals that the strangest for us is often the most familiar. Domestic places transform into an area where the bizarre expresses itself. The atmosphere of places becomes the reflection of a psychological state. Today Kourtney Roy lives and work in Paris. She is represented by Carole Lambert in France et F.A. Cesar in Germany.