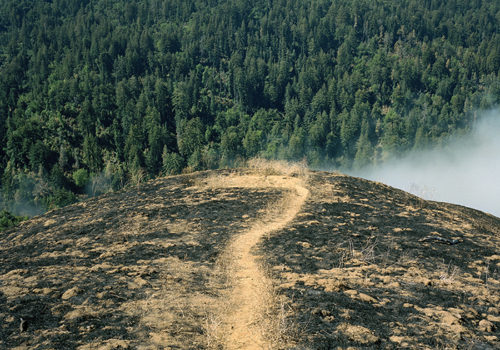 Big Sur, El Sur Grande, or ‘the big country of the south’ is a spectacular section of California coastline south of San Francisco and north of Los Angeles. Famous for its scenic drive along the ocean, it has become one of the most popular tourist destinations in the United States. Once Highway 1, the only road in the area, was built, in the 30’s, Big Sur became home to artists, writers, entrepreneurs and homesteaders drawn to the rugged beauty and solitude of the coast. They depended on the highway to connect them to the rest of the world.

Wildfires, mudslides and heavy rains have always been a part of life on this wild coast, and residents, always resilient, helped each other and rebuilt. Climate change, however, has brought about some stunning changes. As the ocean and the landmass warm, the summers in Big Sur have become longer and droughts more severe. In addition, the highway, once a sparsely traveled country road, now carries four million tourists through the area every year.

In the winter of 2017, when heavy rains followed a long period of drought, the highway bridge to the north of Big Sur slid down the wet hillside, and a 13-acre landslide dropped from the water-logged mountains of the south, the Big Sur area became inaccessible by road. It would be more than a year before Highway 1, lifeline to the community, could reopen for traffic. That is when photographer Kirk Crippens went in and recorded what happened. His photographs made of the landscape show the peace and tranquility, the destruction, and the beauty of the place, that had seen quieter days.

Based in San Francisco, Kirk Crippens has been photographing since he was a child. Institutions and collections that hold his prints include the Museum of Fine Arts Houston, Texas; the Smithsonian Institution, Washington D.C.; and Crystal Bridge Museum of American Art, Bentonville, Arkansas. Crippens began exhibiting in the United States in 2008, and internationally in 2011. His work has been shown in the National Portrait Gallery, London; Stanford University, Palo Alto, California; the Datz Museum, Gwangju, South Korea; the National Portrait Gallery, Scotland; and Pingyao International Photography Festival, Pingyao, China, where he exhibited in 2012 and 2015, and began his curatorial career in 2016. His first book, Live Burls, was published in 2017 by Schilt Publishing. His photographs are represented in Europe by Schilt Gallery, Amsterdam.

86 pages with 44 images in full colour