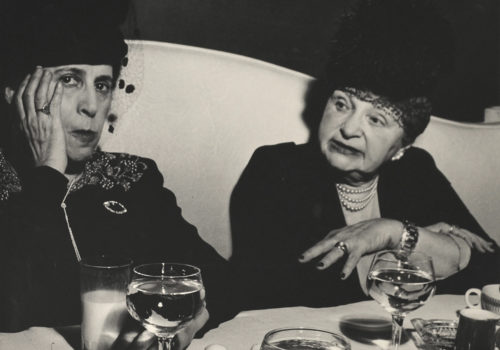 Kicken Berlin is dedicating its 2021 exhibition program to woman photographers of the nineteenth, twentieth, and twenty-first centuries. Female creativity in the history and current movements of photography is an endless fount. Throughout the year, Kicken Berlin will honor and explore these artistic contributions in group and solo shows in the exhibition series Sheroes of Photography. The English wordplay Shero consciously creates a female protagonist from the associations of a male hero; Kicken has chosen the word to explicitly highlight the high esteem for woman photography artists. * These photography heroines, or sheroes, from the last one and half centuries are as multifaceted as they are diverse. What they share in their joint practice of a modern medium they approach with very diverse perspectives on and understandings of reality.

At the core of Kicken’s approach will first be a dialogue among various artists from the 1850s to today with an emphasis on modernism in the interwar era (Part I). From there the gallery will spotlight singular artist voices from the twentieth century such as Lucia Moholy and her contemporaries at the Bauhaus, Tata Ronkholz and conceptual-documentary approaches since the 1970s, as well as East German photographers. Current works will include new positions by Jitka Hanzlová.

Women have been behind the camera since the medium’s birth. Among the first photographs produced were the plant photograms made in the same method as the photogenic drawings by William Henry Fox Talbot: the earliest work in the exhibition is an English botanical plant study circa 1850. The print is ascribed to the little-known “Lady Hatton” and is to be seen in the context of the “Hatton Fern Album” discovered in the late 1980s, individual pages from which are now held by international museums and private collections. This print attests to photography’s place in scientific study and its execution by educated and ambitious woman in upper British society who followed the example of photo pioneer Anna Atkins.

Artistic photography by women achieved its first apex in Pictorialism, the painterly style of photography that prioritised aesthetic impression, mood, and figuration above documentation. Photographic practice grew in popularity and breadth as techniques and camera technology progressed. Photography also offered new career perspectives to women. Berlin’s Lette Verein has held women-only photography classes since 1890, in which numerous prominent German female photographers learned the medium, including Erna Lendvai-Dircksen and Frieda Riess, or Anneliese Hager and Marianne Breslauer. Their spectrum ranged from artistic studio portraits to the experimentation of Neues Sehen. The great Hannah Höch received an applied arts education before joining Dada circles and creating her pathbreaking collage work. Like Höch, Marta Hoepffner (who was taught in Frankfurt by Willi Baumeister) positioned herself at the intersection of photography, painting, and experimentation.

The “subjective photography” of mid-20th-century modernism was indebted to the achievements of the interwar avant-garde. And here too woman photographers were at the forefront of the transformation of reality into enigmatic images: Anneliese Hager, Monika von Boch, and Anne Dilling manifested the potentials of abstraction in their studies of material and form. Ruth Hallensleben’s industrial images gave expression to a cultural historical dimension.

The search for personal and unadorned forms of expression of everyday personal interactions developed parallel to subjective, expressive perspectives. This strand of photography found its protagonist in Lisette Model, who as a teacher had significant influence on the following generation of photographers. Diane Arbus’s work is indebted to Model and is catagorized in the New Document movement. This focus on the conditio humana and “Zusammen Leben (Living Together)” also drove the work of Sibylle Bergemann, Ute Mahler, and Evelyn Richter.

Documentary practices shaped the conceptual approach of Tata Ronkholz in the 1970s and, with a turn to the performative, the American photographer Marcia Resnick. Since the 1990s Jitka Hanzlová has followed a very personal documentary strategy that explores the question of the relationship between the individual and her environment and manifestations of nature.

Sheroes of Photography, Part I