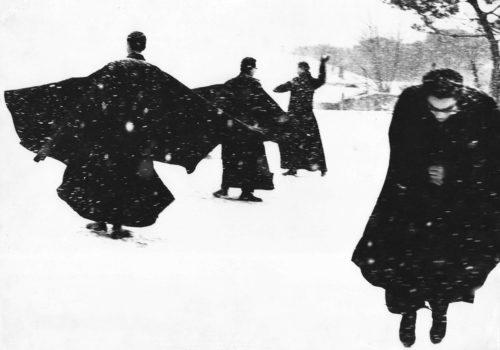 Keith de Lellis Gallery presents Acts of Faith, a group exhibition of prominent Italian photographers who poetically document the heart of Catholic life in Italy during the mid-twentieth century, a time when the sanctity of religion was deeply intertwined with daily life. Italy is the home of Vatican City, the eminent holy city for Catholics which has served as the headquarters of the Roman Catholic Church since the fourth century and remains the largest Christian church in the world today. The pope, who Catholics believe to be the direct successor of St. Peter who was the leader of the apostles, is the head of the Roman Catholic Church and has served as the head of state of Vatican City since the eighth century. Vatican City possesses an ornate collection of religious masterpieces by many of the greatest Renaissance artists including Leonardo da Vinci, Raphael, Caravaggio and Michelangelo’s Sistine Chapel fresco, which was completed in the Vatican Palace, the official residence of the pope.

Italians embraced the medium of photography and a philosophy rooted in progress, rebirth and renewal in the years following WWII on a scale unprecedented in Italy’s modern history. It was part and parcel of a nationwide Renaissance in art, fashion, design and film that embraced the modern sensibility born out of the repression of Fascism. Neorealism in Italian cinema pervaded the art of photography and yet the antithetical visual language of abstraction also thrived simultaneously. Subject matter in the Italian Neorealism movement was focused on family, the bountiful land, street life, and religion, with particular emphasis on Catholicism. Some of the most well-loved pictures of the twentieth century are those of Italian master photographer Mario Giacomelli with his series of pictures of black cloaked priests exuberantly playing in the snow. The devotion to religious service is a high calling in Italy and so visuals of monks, priests and nuns permeated throughout the work of the legions of Italian artists immersed in the nation’s photographic circles that blossomed from the 1950s through the 1970s with names like La Gondola and La Bussola.

Italy’s rich culture is steeped in the history of religious traditions and from a young age life is marked by many rites of passage including the sacraments of baptism, first communion and confirmation. The journey of taking these seminal steps throughout one’s life is featured throughout Acts of Faith, such as in Carlo Bevilacqua’s image of altar boys commemorating the crucifixion of Jesus and his death at Calvary Hill during the Christian holiday known as Good Friday, while a more lighthearted image by Gianni Berengo-Gardin captures a young altar boy amusing himself by playfully biting on a bouquet of flowers during the Corpus Domini procession at the Piazza San Marco in Venice. The lifelong sacrament of holy matrimony is intimately immortalized in a portrait from Mario Giacomelli’s series “verrà la morte e avrà i tuoi occhi” (death will come and will have your eyes) of a nursing home in his hometown of Senigallia. In this portrait we see an older married couple embracing as their hands rest together on a pair of Rosary Beads, used in the Catholic tradition to help devotees count their prayers.

Many of the photographs on view in Acts of Faith capture the sacred figures of the Roman Catholic Church in moments of sincere piety, as seen in Nino Migliori’s divine portrait of a priest kneeling in prayer before the crucifix as a sea of white light surrounds him, or Alberto Galducci’s image of a small gathering of nuns ascending the hills in quiet contemplation while the heavens seem to watch over them from above. These traditional photographs of consecrated life are displayed among more playful images of nuns on sandy beaches and priests cavorting in the snow, humanizing the men and women of God by showing them in moments of childlike joy while popular culture has often depicted these holy figures as singularly austere.

On display is a photograph by Giacomelli from his series Lourdes that documents a seemingly never-ending mass of praying devotees who have travelled to Lourdes, a Catholic pilgrimage site in Southern France, in search of a miraculous cure for their disabilities and illnesses. The photograph evokes the theological beliefs of late German philosopher Karl Marx when he stated religion as “the opium of the masses” yet also “the heart in a heartless world.” Acts of Faith is a remarkable retrospective that presents an astute view of religious life in Italy during the mid-twentieth century.