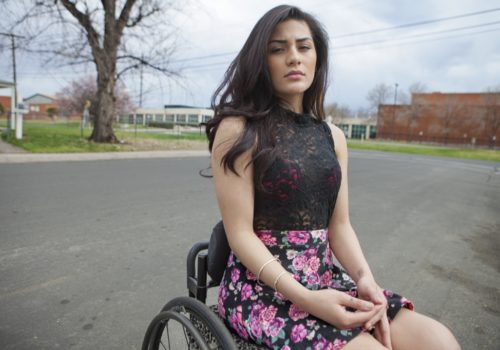 The increasing ubiquity of gun violence has, unfortunately, become the norm across the world but particularly in the United States, where we have begun to hear horror after horror on an almost daily basis. So much so that it has now started to produce a numbing effect, a helplessness that allows us to hear the news and say, “here we go again” and put it out of our mind. Gun violence is now something we expect to happen.

The goal of SHOT is to focus attention on the survivors of gun violence people who have been shot and survived the experience.

I traveled over 100,000 miles in a little less than two and one half years (2013-2015) to photograph 101 people from every race, many ethnicities and ages 8-80 from across America including high and low profile shootings.

The majority of portraits are taken at the location of the shootings. This adds another dimension to SHOT as most of these locations are banal and “normal” places we all visit: shopping centers, places of entertainment, church, neighborhood streets, movie theaters, the gym etc. Many of the shootings actually occur in the survivor’s homes and cars.   This again gives the viewer another chance to connect with the participants and to imagine just how close we all are to the possibility of this happening to someone that we know.

Those who die from gun violence can only address the issue as statistics and memories of lives that were. The SHOT project focuses on the living whose lives have been forever changed by the emotional and physical trauma of gun violence. It is no longer an abstract idea but it becomes a real issue when we see the 101 survivors united in this project.

SHOT enables us to explore the dialogue about gun violence. SHOT is not meant to be divisive; a number of the survivors in SHOT are responsible gun owners including an NRA member. It is not meant to be polarizing but rather to connect us to each other and how much we have in common, giving us the opportunity to begin to take an unbiased look at guns in American society. Most Americans want responsible gun laws.

Kathy Shorr is a photographer who lives and works in New York.