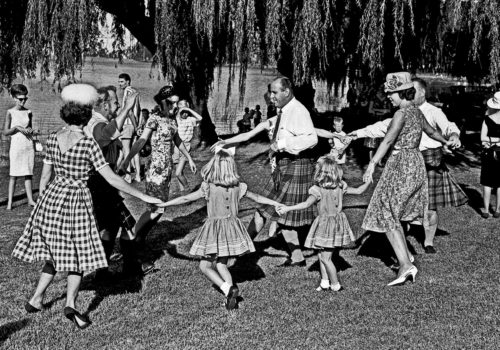 Change of scenery, if I may, for this third and last part of the triptych dedicated to Jürgen Schadeberg. We find ourselves on the other side of the barrier, as imaginary as it was unbearable. This man and his personal convictions had chosen their camp, the photographer had no camp. How he was able to integrate himself and restore the life that continued in conditions beyond comprehension in the townships under apartheid. He knew how to make us witnesses of a daily life hardly easier on the side of civic privileges.

Let us remember that a very large part of the so-called white population of South Africa was formed of massive immigration from Europe at the end of the Second World War. During the great post-war economic crisis, a large number of Europeans from both camps of war went into exile in what was advertised as an el Dorado.

This population, quite far from the family aristocracy rooted in these African lands, considered the segregationist rules of Western societies in the mid-twentieth century as perfectly normal. The anachronisms of apartheid were considered legitimate, remember that in France women did not access the polling stations until after the war.

It is into this atmosphere that our young Jürgen, himself a fresh immigrant, will also show the actors of this other story.

Always in his search for authentic transmissions, the photographer changed his method. He had observed that all these characters were locked in the world they had created for themselves, a somewhat artificial world where you have to appear to be recognised. In this universe, you had to be more or less in representation. Jürgen understood it very well, no need to use the invisible camera, he could be present, the photographer was there, let’s take advantage of this great opportunity. The postures, the looks are addressed directly to the lens of the camera. It remained for the photographer to press the button just at the right time, which was not the easiest in such conditions.

There are no more stolen images that convey feelings and decency. These photographs take us in scarcely pleasing shows even if the smiles must sometimes be in order. What an exceptional talent to transport us from one universe to another without modifying the purpose of the goal but with assumed choices for finding the desired results.

It is a success, because this last space for appearance more socially enviable leaves with the photographs of Jürgen Schadeberg the indefinable taste of that time. What a precious gift this will be for historians!

All the prints, made by Jürgen, of these beautiful photographs are visible in Paris until the end of February 2021 in the gallery.

We owe this discovery thanks to the knowledge of Scott Paul Billy, this American who spent 25 years of his life in South Africa, before coming to settle last year in Paris. It is in his gallery, opened a year ago, which is dedicated to the works of local creators that the photographs are visible. This exhibition, the first of this magnitude in France, was prepared with Jürgen Schadeberg before his death. The choice of works and the period chosen were judicious to discover the qualities of the photographer.

If you are passing near “Bonne Nouvelle”, I invite you to take a detour to “Bonne Espérance Gallery” and to meditate for a few moments in front of the originals.