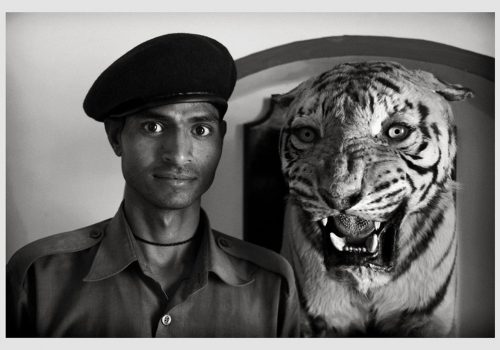 INDIA has long been held as a desirable destination for photographers for its unique and fascinating history and culture: it’s difference from the West and much of Asia. Numerous famous foreign photographers, including Margaret Bourke-White, Brian Brake (a New Zealander), Henri Cartier-Bresson, Steve McCurry and Marc Riboud early became known for their work which introduced India to a world-wide audience in the mid-20th Century. Today, with the opening up of China, an increasing number of Chinese photographers are now choosing India, their giant neighbor, as their first foreign destination. This exhibition at the 2018 Pingyao International Photography Festival of recent black & white photographs by New Zealand’s Julian Ward was intended to provide an opportunity to compare and contrast Ward’s approach to India and photography with that of Cai Huansong, an independent Chinese photographer of similar age and experience.  Alas, due to the different ways in which foreign and local exhibitions are supported by PIP Pingyao, it proved impossible to support my proposal of direct comparison and dialogue about the meanings and intentions of their work on a shared subject. John B. Turner

JULIAN WARD was born in England in 1948 and emigrated to New Zealand as a child.  Trained as an engineering draughtsman, he became a maker of educational films for the New Zealand government and since the mid-1970s has pursued photography as his preferred art. He has published four books: Face Value(1993); Just A Word….(1996); Wellingtonia(2006); and Wellington Streets(2014). He has been included in numerous group exhibitions, including a two-person show with John B Turner at the 2012 Pingyao International Photography Festival and has had more than five solo exhibitions since 1979. He first went to India in 2010 and revisited several times, most recently in 2018. He is represented by two dealer galleries in Wellington and a broad selection of his work can be seen at www.julianward.co.nz

JULIAN WARD’S ARTIST’S STATEMENT: Most of these photographs are from Rajasthan (central, West India), north of Delhi in a Tibetan Colony area (Majna-Ka-Tilla), the west coast and backwaters of Kerala and beaches at Goa. We, (my wife and I) also spent time in the massive city of Mumbai.  We were in India in 2010, 2012, 2017 and 2018 for approximately two months on each visit. We tried to avoid tourist areas and travelled mainly by local transport.  We were always free to stop and nest when we found interesting places.

I am a photographer who generally responds to what’s in front of me, rather than being a documentarian or following themes.  So, wherever I go, pictures appear like magic. See my article in F11magazine: http://issuu.com/f11magazine/docs/issue61-decemberjanuary2017

Curator: JOHN B TURNER, was born in New Zealand in 1943 and now lives in Beijing. He curated his first exhibition in 1968 and went on to produce a national survey of Nineteenth Century NZ photographs in 1970. He was a lecturer in photography at the University of Auckland for 40 years and in 1973 was the founding editor and now co-editor of PhotoForummagazine.Co-author with William Main of New Zealand Photography from the 1840s to the Present(1993). Edited Ink & Silver(1995) and Eric Lee Johnson: Artist with aCamera (1999). Curated `To Save a Forest….Photographs by leading New Zealand conservationists: Martin Hill, Ian Macdonald and Craig Potton’ for the 2014 Pingyao International Photography Festival. Book of his own work, Te Atatu Me: photographs of an urban New Zealand village, published 2015. Curated ‘Tom Hutchins. Seen in China. 1956’ for PIP Pingyao in 2016. Co-curator with Dr Phoebe H Li of the exhibition and book ‘Recollections of a distant shore: a photographic introduction to the Chinese in New Zealand’ for the Overseas Chinese History Museum, Beijing, 2016. www.jbt.photoshelter.com