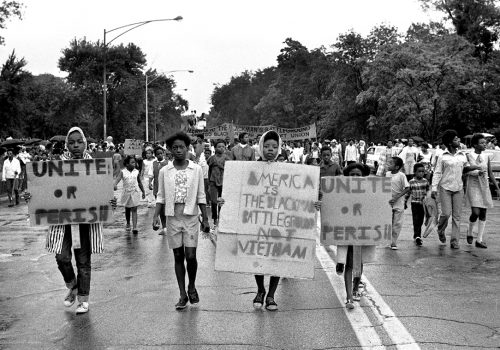 John Simmons is a major American photographer. As a young man growing up in 1960s Chicago he began his career in journalism, his early pictures appearing in the Chicago’s black newspaper the Chicago Defender. His seeing was deeply influenced by the words of Langston Hughes, the pictures of Roy DeCarava and his mentor, the photographer Bobby Sengstacke but the pictures he makes are clearly his own. From the first moment his instincts helped him to see his subjects with warmth and understanding. Deeply knowledgeable about life in the streets and the currents of unrest then sweeping the black community Simmons had access to the major players of the day, the Blackstone Rangers, the Nation of Islam, and Angela Davis, among others. He made strong pictures showing their lives, but he also spent his days photographing everyday life on Chicago’s vibrant South Side. His street pictures reveal an America largely unrecorded, quotidian in nature, each image one of lives unseen in the middle of a neighborhood few white photographers ever ventured into. The pictures are a record of everyday greetings, of comings and goings, of private moments between people. Even in his photographs chronicling the news stories of the day, the public gatherings, demonstrations, and parades, he always finds individuals amongst the crowd.

Later, Simmons made pictures in New York and the American South. The locations changed but the work remained the same, heartfelt pictures made by an observant man. And even today when he is known as an acclaimed cinematographer and his schedule is filled with work in the studios of Hollywood he continues to take his still camera into the streets to record life as he sees it. Clearly then, a show of Simmons’s pictures offers much to see, but where can you see them?

The Museum of African American Art is where. A little known museum hidden away inside a department store in the Baldwin Hills section of Los Angeles. To get to the museum you must enter the store, pass the men’s furnishings, take the escalators up to the third floor, then continue on past the bedding, till finally you find the museum. If that makes the journey sound difficult pay no mind, it’s not, just a little unusual. Once inside the museum you will be repaid by almost fifty strong and personal photos, a taste of images from a lifetime of pictures worth seeing. Go see them hanging on the wall while you can.

No Crystal Stair – The Photography of John Simmons A.S.C.

The Museum of African American Art

(Inside the Macy’s at the Baldwin Hills Crenshaw Plaza)