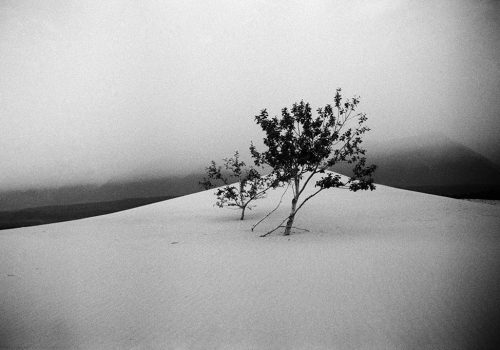 Deserts have always fascinated photographers.. Often a photographer enters deserts to capture the beauty of the landscape with a setting sun or a beautiful cloud formation and that is the final result. As beautiful as that might be, it was not what I was seeking. I wanted to go further.

My concept, my goal, has been to use the desert as a painter uses a virgin white canvas; and while traveling through different deserts of the world (from Russia to Egypt, Mauritania, Oman to the USA etc) I sought to discover what imagery was revealed to my eye – -sometimes it was figurative, sometimes abstract.

In the South Sinai in Egypt, there were tall hills of rocks. Climbing those hills, walking through what appeared to be a simple amalgam of stones, I discovered anthropomorphic figures such as faces, fish, elephants, humans etc Suddenly the rocks, these non-living elements were transformed into the opposite: living, expressive, vibrant figures. In the Nevada desert, in the United States, or the vast deserts of Mauritania, I would look across the plains and see what seemed like “nothing“: dead trees or a grouping of cactus plants. After walking through and around them, allowing my eye to wander freely, keeping my mind empty, without pre-conception, these inanimate objects would suddenly become a human being crying to the sky, a couple arguing, a dancer suspended in air. In the dunes of Oman the lights and shadows transformed a seemingly neutral valley into the body of a young woman trying to emerge from the sands. In one desert the moving sun would gradually transform a small valley into a beautiful bird. In still another desert from inside the small puddle of dried salt lake appears a man staring at us resembling a figure from Dante’s Inferno and I, like the painter in front of his canvas, with my small Leica, 35mm lens and Ilford film, attempt to capture this image and the soul buried within.

Conceptually I attempt to find the symbiosis between the landscape before me and the imagery buried within me. I do not seek the image rather the photograph finds me. Through this subliminal search the result is, hopefully, my photograph, my “canvas“ is an expression of my inner being, of what I feel as an artist.