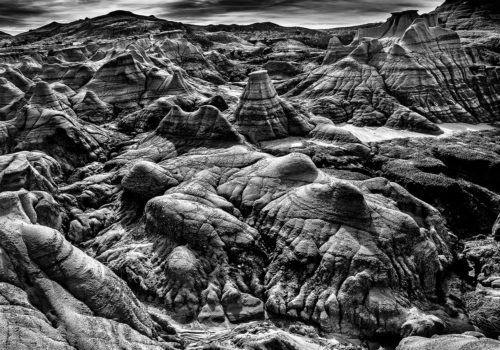 The Surreal in the Real

Our species has turned the natural environment of the planetary crust to its purposes, dwelling in it, cultivating it, mining it, being inspired by its beauty. This body of work takes the relationship a step further by demonstrating the deep connections between the configurations of that mineral crust with human consciousness itself. The pivotal concept is that of pareidolia, the tendency of humans to see familiar figures in naturally generated forms, such as rocks, ice, water, clouds, etc. The Man in the Moon is the classic example.

But modern and contemporary art have enabled us to go beyond commonplace associations. After all, the lessons of Surrealist and Abstract Expressionist painters were to create images that invoke unconscious lucubrations or energy “made visible,” as Jackson Pollock said. As products of fluid dynamics, born from eons of turbulent wind and water erosion, tectonic movements or the contorted flows of lava, concrete energy patterns would seem to be a logical product. But this same vast inventory of forms can’t help but generate figures as well. These can be both explicit and suggested, and are frequently wilder than any previously imagined by Surrealists or even outsider artists—and therein lies the allure of this kind of photography: images like none we’ve ever seen before, yet recognizable and powerfully provocative.

JOEL SIMPSON, found his lifelong interest in landscape photography and geology merging with the Surrealist and abstract art he loves, in his most recent body of work, The Surreal in the Real. Over the past two decades, he has traveled extensively in the US West, Canada, and to locations in Europe and around the world in search of exceptional geological sites to furnish the raw material for his geo-aesthetic visions.

Simpson’s work in another vein has been exhibited in Paris (Musée de l’érotisme), Tours, Rome, Barcelona, and many US galleries and art fairs. His images have been published in Silvershotz (Australia),  View Magazine (Brussels),  Camera Arts (Boulder, CO) and Focus Exposures  (online).

Simpson’s awards include ten Black and White Spider Awards (2012–2020), and was named one of the “Best Landscape Photographers of 2019” and again in 2021 by One Eyeland (India). His 2019 book, Earthforms: Intimate Portraits of Our Planet, was featured on the cover of Natural History Magazine (June, 2019) and won the 2019 Nautilus Gold Award for Art and Photography. A shorter book, Playgrounds for the Mind (50 pp.)  came out in 2021.