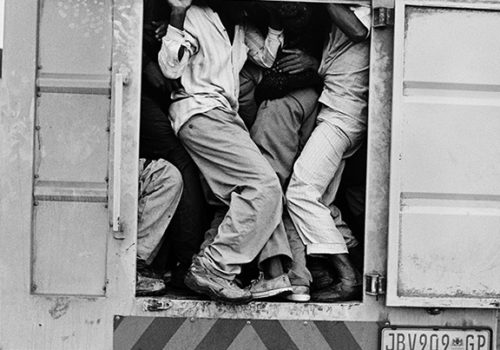 Since the first democratic elections in 1994, there has been a strong increase in immigration – people making their way across the border into South Africa. War, famine and poverty in Africa make South Africa an attractive option for a better life.

The borders around South Africa are extensive and impossible to secure. Therefore the Department of Home Affairs with the aid of the South African Police Services deports approximately 180 000 immigrants a year . It costs the government R300 (Euro 30) to repatriate an immigrant from a neighbouring country without a valid residence permit. In 2001, there were 300 immigration officers in the country, a lack of police manpower and corruption within the process. There was also the problem of xenophobia by the majority of South Africans, who feel the immigrants were stealing their jobs for lower wages and play a major role in the crime in the country. South African newspapers often carried stories of the abuse and hardship that many immigrants have to face at the hands of South African citizens.

My project began after the devastating floods in Mozambique in 2000. At the same time, ‘Operation Crackdown’ was in progress in South Africa. This was an ongoing initiative by the police services to eliminate the high levels of crime in our country; part of their duty was to detain ‘illegal immigrants’. Hillbrow, an inner city suburb, was seething with policemen. With court orders in hand, the police swarmed buildings looking for immigrants without valid papers or with stolen goods. Once detained, these people were taken to Hillbrow police station to fill in forms and then bussed off to Lindela – a repatriation centre in Krugersdorp, approximately 45 minutes west of the inner city. From there, the detainees from neighbouring countries would board a train, which would take them back to their country of origin.

I chose to spend my time with Mozambicans as they were in the majority and because – as a result of the floods – many would find themselves without homes when they arrived back home.

On completion of my project, I was informed that the train carrying the immigrants was no longer in service until further notice due to an article that had appeared in a South African newspaper. Journalists from The Mail & Guardian, who had been on the train with me, had disclosed the corruption that took place on the journey to Mozambique. Illegal immigrants were paying certain policemen, who guarded each carriage, R100 to jump off the train while it was still in South Africa. On that specific train journey, approximately half the immigrants on the train had jumped off. The immigrants who did not jump off the train continued their journey through flooded areas, facing destroyed towns and homes replaced by displacement camps.

The Human Rights Commission in South Africa monitors the affairs of immigrants closely, however, my experience on this project sometimes left me with a bitter taste in my mouth. I feel that some South Africans sometimes forget their dark past and what it is like to be on the receiving end.

In 2008 and 2015 further Xenophobia attacks took place in South Africa.