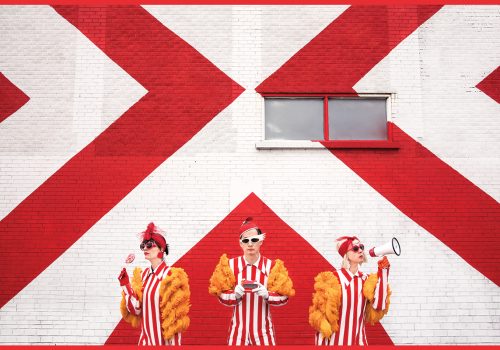 A photo project launched by Mélissa Lefebvre, a drama teacher at a Montreal high school, and co-produced by photographer Joannie Lafrenière, Interwoven Roots grew out of the encounter between 12 to 16 year old immigrants in a reception class and elderly people from the west end of town. The project brings together two generations, two very distinct life contexts, two worlds that complete each other here with tenderness, humor and fantasy through various staged photographs. Interwoven Roots gathers the traces that dot an individual’s memory and that are transformed, in the course of these get-togethers, into a collective poetry.

Participants have claimed for themselves the memories of certain ones or the dreams of certain others within colorful stagings, sorts of photographic haikus. Thanks to these multiple identities, intercultural bridges are built and new connections are woven between two generations that would not otherwise have crossed paths. More than a cultural-mediation project, this proposal of Mélissa Lefebvre’s, combined with the singular world of Joannie Lafrenière, broadens the potential for collaborative projects between education and the arts.

Interwoven Roots is an exploratory laboratory embodying a value that is at once documentary, artistic and social.

A graduate in journalism and photography, Joannie Lafrenière is interested in the beautiful people she has the privilege to come across on the road through life. Through her practice, anthropological in nature and tinged with humor and an unfailing fascination with golden agers, kitsch and mass culture, Joannie Lafrenière firmly believes that the documentary is an art of encounter that aims to build bridges among human beings.

Her earlier film projects, The Woman Who Saw the Bear, Snowbirds and King Lajoie, have been seen on television and in movie theaters as well as at prestigious festivals right around the planet. She is currently working on a film called Gabor, a documentary feature focusing on the ninety-something photographer she describes as superstar Gabor Szilasi.

Joannie Lafrenière lives, works, dresses up and plays in Montreal, and wherever else life takes her. Her early work as a painter means she’s always been interested in details. Concentrating on the minutest of these led her to photography, to which she brings her painting experience. From the imprint of a stocking on a bare ankle by way of an excess of lipstick on an edited photo, she’s undertaken to collect, classify, arrange and archive objects and images endowed with evocation potential. Hair, animals, porcelain and undergrowth are a few examples of objects that turn up in the bank that she stocks on a daily basis, a repertoire of everyday life and of desire.