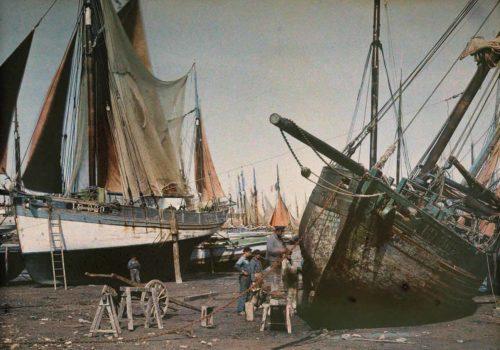 “Soon the whole world will be crazy about colors, and Light will be responsible for it.” Alfred Stieglitz

During its history of almost two centuries, photography has never ceased to reinvent itself according to technical mutations. The Autochrome, marketed from 1907 and emblematic of the arrival of color in photography, constituted one of these revolutions. The great American photographer Edward Steichen (1879-1973) wrote about it that it was “the most beautiful process that photography has ever given us to translate nature”.
The enthusiasm for the new technique was indeed both intense and relatively short: it lasted a little over two decades, the process falling gradually into disuse in the 1920s and 1930s. The autochrome subsequently went through a long period of oblivion. Too fragile, too difficult to expose, not reproducible, it was for a long time the greater neglect in photography, like a dead branch that seemed to have given only too few fruits.

From this abandonment, the autochrome has been withdrawn for two decades by a few historians and collectors who, going against the current, have been able to appreciate its finesse, sensuality, strangeness. L’exposition 1,2,3… Couleur ! L’autochrome exposée brings together 176 works from two collections, including some forty original plates. The diversity of autochromes presented illustrates the very wide use of this support within the society, anonymous or renowned photographers to the photographic service armies.

Accompanying the exhibition presented at the Château de Tours, the album which will be published is a contribution to this renewal of interest illustrated by the two collections.

On the one hand, the AN collection brought together since 2006 by Soizic Audouard and Élizabeth Nora, which by its very high quality and its diversity constitutes a marvelous introduction to the very unique aesthetic of autochrome. On the other hand, the fascinating World War I autochrome collection kept at the Mediatheque heritage and photography. This selection, however rich it may be, has not intended to relate a history of the process but is intended more as a introduction.

We hope that it will raise public awareness to the particular poetry of the autochrome and will show how photography was able to reinvent itself, more than half a century after its conception.