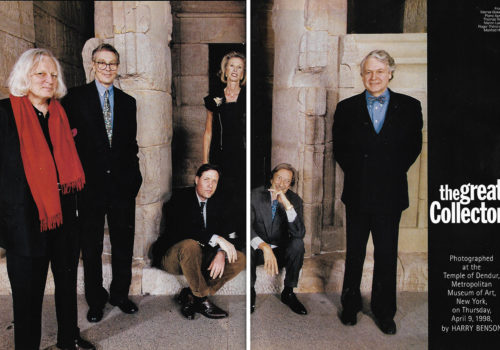 In 1998, I was in New York City working for American Photo.

The same year, with David Schonauer the editor-in-chief, we produced a special issue on the mythical collectors of the time: Marion Lambert, Pierre Apraxine, Roger Thérond, Manfred Heating, Werner Bokelberg and of course Thomas Walther.

Taking advantage of their presence in New York, we had them photographed by Harry Benson at the temple of Dandur that the Metropolitan Museum had made available to us!

Carole Squiers, the editor of American Photo had written this text about Thomas at the time.

« I’ve never looked for masterpieces per se », says Thomas Walther. « I focus exclusively and intently on the image itself : It has to speak me ; it has to be evocative ».

Walther did not look for masterpieces, but he found them anyway, taken by the towering figures of modern photography, including Alfred Stieglitz, Man Ray, El Lissitzky, Alexander Rodchenko, Edward Weston, and Paul Outerbridge.

Since he began collecting in 1979, he has assembled what is probably the most comprehensive private collection of photography from the monumentally creative era between the two world wars.

« I have tried to form a gestalt », he says, « to put together the entire achievement of an era with many significant and varied examples ».

Along the way, Walther realized that the clarity of modern vision seen in between-the-wars photography had precursors in the 19th century. For the last five years he’s been acquiring images that he considers to be visual stepping-stones of the modernist sensibility, from photographers like William Henry Fox Talbot, Carleton Watkins, Roger Fenton, and Charles Nègre.

Alongside the big names, Walther also has works by little-known and anonymous photographers. This kind of vernacular photography can include everything from portraits of animals to crime photography.

« The rather obscure, whimsical images that don’t fit into any categories interest me the most, » he says. « It’s my own vision that I’m trying to find in the vernacular ».

Between-the-wars photography is all the rage today. But it was hardly fashionable when Walther began, except among a small group of people. « As a young man I was a bit of rebel without a cause », says Walther, « and I found my cause in photography, looking for the images that went against the grain ». He remembers, though, that in his early years of collecting, « some of us wondered about spending relatively serious amounts of money for things that hardly anyone was concerned about ».

These images are now highly prized.

Photographic masterpieces from MoMA. The Thomas Walther Collection is curated by The Museum of Modern Art, New York