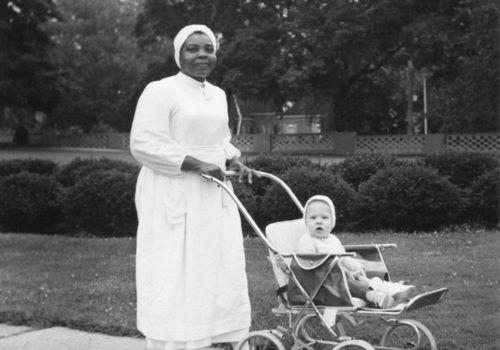 Three years after  The Combat Zone,  In Camera Gallery presents Jerry Berndt’s Beautiful America. Over twenty black-and-white images bring back to life the America of the Vietnam War era and of Bob Dylan.

Born in 1943 in Milwaukee, Wisconsin, and deceased in 2013 in Paris, France, Jerry Berndt possessed a certain firmness that lent clarity to his photographs. It was an indirect, rather austere light, which structured and grounded his subjects in a hyper-lucid manner. This mastery over reality was one of Jerry Berndt’s talents. It allowed him to maintain a distance, or rather, since it’s not a question of a voyeur hiding behind his camera, it kept at bay any temptation ill-suited to the situation. There are no veils of tears or any soul wrenching in his photography. Even when he stayed in Haïti (1986–1991), he didn’t seek to legitimize his presence through dramatic effects.

Jerry Berndt was a watcher. He did not wait for the decisive moment, but instead sought something more imperceptible. Perhaps it was the moment of calm that precedes a storm. Already as a young student, he fought for a certain idea of America. “Profoundly American,” he loved Europe, and especially Paris, where he settled in 1998, even though he felt like a “cultural refugee.”

This autodidact threw himself into photography with passion, straying far from the straight path laid out by the heavyweights in the field. He was in the margins. Off America. We remember his series The Combat Zone, named after a hot zone in Boston, Massachusetts: sex, solitude, segregation; and the desire to stay alive at any cost. It seems as if characters from a John Cassevetes film drank themselves to death only to instantly revive between night-clubs, bouts of laughter, and whispered dialogues. The prints currently on view at  In Camera Gallery are drawn from this series shot in Boston between 1967 and 1970 and from Berndt’s long-term project, Beautiful America. The title is tinged with slight irony and reveals Jerry Berndt’s spacious cartography (from New York to Los Angeles), his resistance to the banal, his peace-loving spirit, and the care he put into editing his photographs. He also loved the darkroom. His partner, Marie-Pascale Lescot, points out: “I believe this room gave him stability: it protected him from the outside world and its chatter; he worked in darkness, red glow, and silence, in the company of his friends Coltrane, BB King, Monk, and Parker, and of his archives that would slowly take shape. It was a magic chamber, scientific and absolutely familiar.”

Watch out for the bear, Jerry’s grandmother Emma used to say, you can eat him or he can eat you. This warning invariably comes across in Jerry Berndt’s photographs. Don’t get swallowed whole, look straight ahead. Never lower your eyes, advance head on: An armchair dumped in the weeds, bearing imprints of long use; a man in his Sunday’s best, like a lone survivor after the deluge. With every take, this make-believe bear hunter and an authentic photographer orchestrated his opus.

Composed between 1960 and 1980, Beautiful America does not show iconic corners of a country so wrapped in legend that it may seem to be a labyrinth of clichés. Instead, Berndt approaches it at the human level: shards of solitude; the unbroken chant of a silenced majority. With Beautiful America, Jerry Brandt abandoned the world of night-clubs and gave expression to his vision of a nation of immigrants.

Brigitte Ollier worked as a photo critic for the French newspaper Libération for 30 years and is now an independent writer.