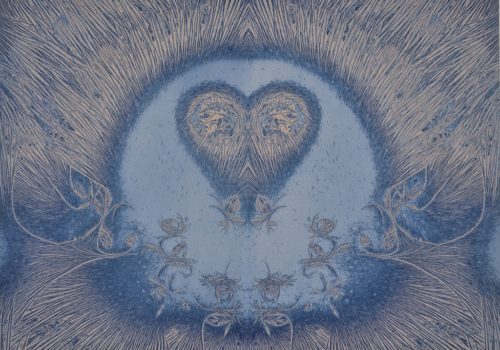 Their first meeting was in 1959, when, for professional reasons, Denis Brihat had contacted Labonicol, the photo lab founded by Claudine and Jean-Pierre Sudre. They hit it off straight away: Claudine, Jean-Pierre and Denis. In photography, their paths criss-crossed until the deaths, first, of Jean-Pierre, then Claudine.

But I should also add that in life  they were very, very close friends, they spent so much time together, some good, some not as good, even more  so when the Sudres moved to the Luberon in 1972, which they had discovered thanks to Denis.

Their “struggle” (in a manner of speaking!) to have the idea accepted in France that photographs also go on walls, their closely-shared research, their exchanges about old processes, their commitment to teaching. It was Jean-Pierre who pushed Denis into creating, in 1970, an annual training course to train future photographers (that the Sudres began in 1970) and so many more things and above all their passion to impose at that time this energy that others called “creative photography”.

Shared exhibitions: Kodak exhibitions in 1962 for an “Adventure in Matter” in Paris, Artek Gallery in Finland in 1967, the same year at MoMA in New York, several times in Provence and the last group was Denis Brihat and his friends: Pierre Cordier, Jean-Pierre Sudre and Jerry Uelsmann in the beautiful Galerie de la Gare in Bonnieux in 1994.

Denis often said that, when he set himself up in Provence in 1958 on the barren plateau of Claparèdes to do “the photography” that he wanted to do, he survived extremely precarious and difficult conditions, thanks to the understanding, support and visits of Claudine and Jean-Pierre and of Jean Dieuzaide.

Jean-Pierre Sudre and Denis Brihat explored their craft fully, in many ways, but always together, serving the vision they wanted to give to the world. The opposite of technicians. Craft  servicing  art.

They meet  again in 2016, showing in New York in the same building, Jean-Pierre Sudre at the Tom Gittermann Gallery,  Denis Brihat, at the Nailya Alexander Gallery, almost 50 years after their first joint exhibition, with Pierre Cordier, in N.Y. at MoMA at the invitation of John Szarkowski.