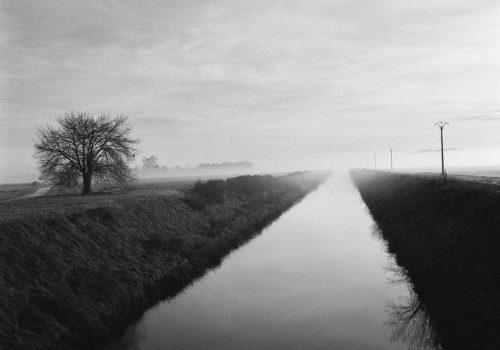 Everyone in the world has their own Madeleine de Proust. Mine looks like a hilly landscape that gluttonous quarries are gradually eating away at. At the very least, the area must be 3 square kilometers. It’s not much, but enough to preserve a host of childhood memories.

First there are these fields, carpets of gray and green shades, stretching as far as the eye can see and which, in the right season, see the corns rising up towards the azure sky. You have to get lost in this labyrinth, hear the ears of corn cracking under the damp soles of your shoes, take your breath in the morning mist… These grounds have a particular scent, which on cold winter days reminds me of the weather when still a child I went with my uncle partridge hunting. Here and there trees, sometimes aligned, sometimes solitary, overhanging the expanses and drawing baroque forms in the fog.
Then there is the unique and grandiose view of the Pyrenees chain. For me, the horizon is closed. It’s not like in the United States where the roads go on forever. No. I grew up facing these mountains, protective barriers and jealous guardians of the rain clouds. The sight, the smell, the touch of the earth, this fertile land too watered by the jolts of the Garonne. Everything grows there, it is an attic where human crops delight game, rodents and birds.

Surveying these 3km is finally immersing yourself in a concert of cries of buzzards, hoopoes and the gallop of frightened hares. Accustomed to the constant noise of the city, I try as often as possible to give my ears the pleasure of this sweet melody.

Whirling during the day, the latter rings with a slow tempo at night, alternating with a heavy, almost palpable silence. I particularly appreciate these hours, when guided by the light of the moon, I stroll along these paths.

Hunt is the faithful portrait of this archipelago, land of games for my childhood memories and landscape of choice for future stories.

Originally from the South-West of France and living in Brussels, Jean-Luc Feixa began his career as a journalist before embracing the profession of press officer. A self-taught photographer, he has been working on long-term series for fifteen years. He is a member of the Salamander collective which aims to promote various cultural projects of his native region. His work has been exhibited in Belgium, France and the United Arab Emirates. He is the author of the photo book “Strange Things Behind Belgian Windows” published last year by Luster editions.

The exhibited series can be viewed at this address: www.jeanlucfeixa.com/hunt