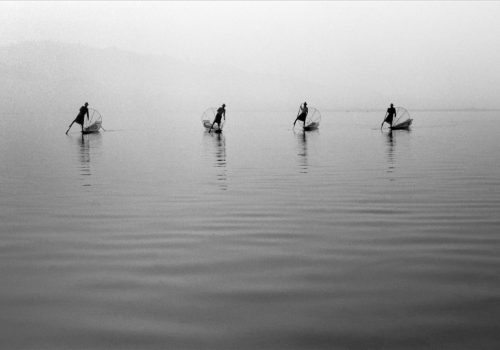 Jean Larivière was one of the most flamboyant French photographers of the 70s, 80s and 90s. And then he disappeared. He returns today with Gabriel Bauret. A priori, it’s a small exhibition, do not trust it. It’s a perverted teaser designed to make you want to go to see the hallucinating installations he prepares! Play the game, you will not be disappointed. – Jean-Jacques Naudet

It has been fifteen years since Jean Larivière gave any sign of life. We remember his brilliant work for advertising and fashion, especially his close collaboration with the renowned baggage maker Louis Vuitton. This was driven by a very personal and ambitious range on the theme of travel, to the limits of the possible, and relying on a great complicity with the direction of the brand. In the context of photographic commission, Jean Larivière has established himself as the author of visual adventures constantly renewed. We appreciated his sense of direction, his demanding compositions, his mastery of lights and black and white.

Although he was no longer talked about, he did not stop working, searching and producing silently, stubbornly, in his amazing studio-atelier in the rue Popincourt in Paris. A space “inhabited” by all sorts of collected objects, each one more unusual and unexpected than the other, and revealing the child he has never ceased to be as well as his immoderate taste for exploratory travels whether on land or sea, or in the sky. A universe in the image of the original spirit that animates his creations.

Today, he comes back to a gallery in the Saint-Germain district, with the obvious desire to let people know that he is still there, bringing to light some of the major pieces of his past productions. But this hanging also prefigures, including a diptych paying tribute to Andrée Putman, what he plans to deploy more widely in the future. For now, it shows works that are immediately obvious by their very large format, and this dimension is found in everything he does now. As for the principle of the diptych, it echoes his research in which photography composes each time with another medium: drawing, video, sound … some of the motifs are inspired by fragments of autobiography, particularly related to his childhood . Photography is always present in his approach, including in his most sophisticated inventions, like a trunk with multiple drawers that makes the “portrait” of the wind captured in different parts of the globe. A bit like a Marcel Duchamp who had in his time locked in a glass bulb the Air of Paris.

Jean Larivière likes to talk about portrait, even when it’s an object he’s photographing; seemingly inanimate, but apparently only. For the object, in each of its realizations, is mixed with life, with thought. And if the act of creation is for him something extremely serious and profound, he is never really detached from a form of play. It is this ambivalence that characterizes precisely his personality, his career and the work. that he tries to build.

* Jean Larivière is preparing a book that will bring together all his works undertaken since the 1960s.

Following his studies in 1963, at the School of Fine Arts in Angers, Jean Larivière began research work on movement, space and time that led him after ten years to the realization of ‘cinematic images’ Never always’. Consisting of sequences of photograms and reworked photographs, superimposed to infinity by a subtle game of layers and filmed again with color cinemascope, the film with surrealist accents impresses Matta and reveals the formal vocabulary he will develop later in his photographs. After many encounters, the most notable of which are those of Chris Marker, Salvador Dali, Roger Vadim and Barney Wilen, he turns to advertising photography imposing his technique, his formal register and iconography. In 1978, the Louis Vuitton House invited him to produce a catalog shooting took him from Guadeloupe to Rajasthan through New York and Montreal. These photographs mark the beginning of a long collaboration with the brand going beyond the advertising commission.

“A little because of his stuffed elephant fetish  and a lot because of his photographs, I find it difficult to imagine Jean Larivière other than as a grown child and as a magician.  A child, I am convinced that he wanted to remain so, thus preserving visions and an imaginary that his official condition  of “applied photographer” could very often have put into question to make it fit into the mold of luxury and chic advertising.

Magician, he became, refining the “stuff”, the know-how,  the least important is not his knowledge of light and the finesse of treatment he devotes to it. I am, each time captivated, in the etymological sense of the term, by his lights, his ability to pass from the vibrations of the grays to contrasts, from backlighting to shading, or even to make them coexist on the same image, and this until  the last detail of the final print.

From portraiture to fashion, from staging to landscape, from travel chronicle of to still life, he makes fun of genres, transcends them to strike us, with his obvious sweetness, with images that could not have existed such they are if it was not photography.

Larivière, who for twenty years offered a dream imagery to Louis Vuitton, is also an artist who has engaged in dialogue with abstraction, who has asked in a very serious way  about the portrait, the question of figuration, who explored the possibilities of narration, who decided one day, in a very serious way, to belong to classic photography  while remaining attentive to the movements, research, arts and graphics of his time. ”

Christian Caujolle, Excerpt from the catalog of Jean Larivière’s exhibition at the Musée des Arts Décoratifs in Paris in 2006