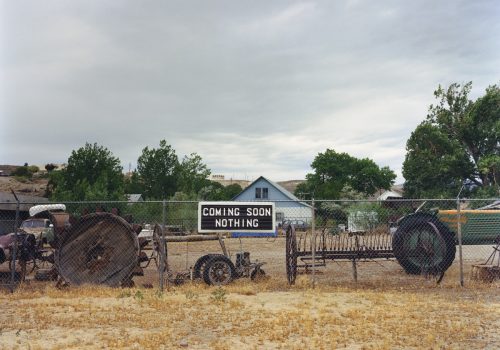 Jane Hilton has been road tripping throughout the United States for the last thirty years. The fact that she comes from London as a photographer and filmmaker makes her observation more acute. After three decades, she has accumulated enough material to create a picture of a landscape beneath the vast skies, of the highways and vistas of automobile graveyards. In her persistent probing from the wedding chapels of Las Vegas to the bordello rooms where the sexual exchanges are fulfilled, she shows a hidden world behind the barriers. Persistent human loneliness and an ongoing violence at the very core of the place. One can easily see how the state of Nevada with the ‘loneliest road in all of America’ (Highway 50 East) became the home of nuclear testing and military activity. Hilton refers to Nevada as her favourite state in the US with its’ paradoxes and contradictions. It is both ‘the land of opportunity’ and the ‘dumping ground’ of America. It is therefore no surprise that it has become the subject for her latest monograph due to be published next year.

The image ‘Coming Soon Nothing’ was shot whilst she was living in Carson City shooting ten documentary films in a brothel for BBC called ‘Love for Sale’. There was a small town close by, called ‘Dayton’, which Hilton would often visit when there was time away from filming. Historically this town grew from the miners that flooded there looking for gold and silver. The reminders of those lucrative days gave the town it’s charm, which was why director John Huston used it to film ‘The Misfits’ with Marilyn Monroe and Clark Gable. An iconic Hollywood movie which we associate with the American West, and was to be the last appearances of both these actors.

The portraits of the working girls of Nevada were taken ten years after making the films for the BBC. While the films had been quite upbeat and informative, Hilton felt that shooting some more crafted still photographs could convey something different. She made these portraits to challenge the traditional idea of beauty and any preconceptions that the viewer might have. She wanted the viewer to look at these women for who they are, and not from a perspective of what job they performed.

By choosing to photograph the girls with a plate camera, the process took hours of patience, making it a bonding experience where the girls revealed their own feelings about their journey as a working girl.

In 2018 Hilton decided to travel around the perimeter of the Nevada Test Site, and venture to the boundary gates of Area 51, to photograph the contamination of the landscape. It occupies over a third of Nevada, and is one of the largest deserts in America. Over a thousand nuclear tests have been performed there since the 1950’s. Originally established in 1951, covering 1,360 square miles of desert and mountainous terrain. The ‘atomic bomb tests’ with their distinctive mushroom clouds, became a tourist attraction for the hotels and casinos of Las Vegas, just fifty miles away. ‘Atomic Parties’ and picnics from Mount Charleston were extremely popular until ten years later when the ‘fall out’ effects of cancer appeared, and then all the testing went underground.

Hilton’s most recent and ongoing project ‘Drag Queen Cowboys’ were shot in similar locations to John Houston’s ‘The Misfits’. Reinforcing the strong connections to the West and showing these performers away from their natural habitat of clubs and bars. It was a conscious decision to photograph them without any artificial lighting, on a 5×4 plate camera, with black and white film, and no retouching. Collaborating with the subject matter, the Drag Queens chose their outfits, wigs and applied their own make-up.