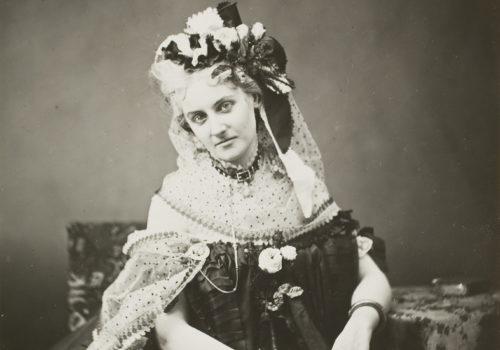 James Hyman Gallery presented recently the very first London exhibition of one of the greatest figures in the history of photography, the Countess of Castiglione.

This major solo exhibition includes over fifty rare portraits of the Countess from the 1850s to the 1890s. Directed and staged by the Countess, herself, and created in collaboration with the studio photographer Pierre-Louis Pierson, these “self-portraits” are some of the most extraordinary pictures in the history of photography, precursors to fashion photography and performative self-portraiture.

Today, we live in a world of selfies and social media: an Instagram world of constructed identities, performance, and disguise. But before all this, before super-models and influencers – 150 years ago – one of the most radical figures of the nineteenth century was pioneering new forms of fashion and conceptual photography: autofiction. In hundreds of portraits produced over a period of decades the Countess staged scenarios and performed different roles, to present different characters and personalities and to reflect multiple, fluid, unfixed identities.

Despite decades of activity, photographs by the Countess are incredibly rare as very few prints were made and she chose not to distribute. In fact, major exhibitions of her work only took place at the end of the 20th century at the Musée d’Orsay, Paris in 1999 and then at the Metropolitan Museum, New York in 2000. Most of her work is now in the Collection of the Metropolitan Museum.

The exhibition presents some of the most famous images of the Countess as well as an exquisite, recently- discovered painted photograph of her which will be exhibited for the very first time.

The exhibition includes vintage prints as well as prints specially made in 1900 for her great admirer, the symbolist poet Robert Montesquiou, who spent thirteen years of his life writing her biography, which was published as La Divine Comtesse in 1913.

“I’m really excited to stage this special exhibition by arguably the most contemporary of all nineteenth-century photographers. I’m passionate about early photographers such as William Henry Fox Talbot, Roger Fenton, Julia Margaret Cameron, Charles Negre and Gustave le Gray, but, for me, no one is more influential or relevant to today’s photographers than the Countess of Castiglione.

The Countess is arguably the most radical and contemporary photographer of the nineteenth century. Today, her relevance is everywhere. She stands at the start of a line of conceptual, performative, inventive self-portraitists such as Claude Cahun, Francesca Woodman, Hannah Wilkie, Jo Spence, Sophie Calle, Gillian Wearing, Cindy Sherman and Tracey Emin, and is an inspiration for numerous younger artists, among them Zanele Muholi and Heather Agyepong.

The work is incredibly rare making this an important opportunity for collectors to acquire such important works.”

The portraits come from three main periods: 1856–57, 1861–67, and 1893–95 and the exhibition takes us on a journey from the Countess in her prime – costumed and fetishised as the most beautiful woman of her age, through images in which she attempted to reclaim former triumphs, to emotionally charged late images which suggest not just the fading of her beauty but also psychological trauma. After the glamourous masquerades of her early photographs, these harrowing later pictures provide a devastating portrayal of loss and ageing.