James Casebere : On the Water’s Edge 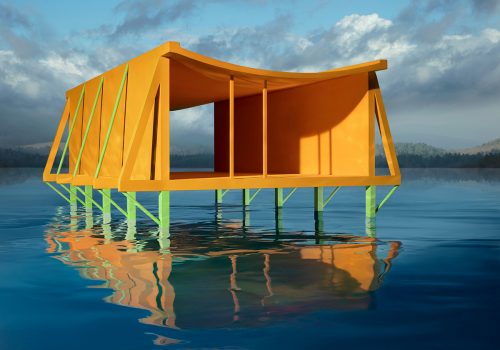 For this new exhibition, James Casebere once again displays his mastery of staged photography with an original series that accurately lays bare major contemporary questions around climate change and the threat of environmental disaster.

In 2016, in response to the alarming rise of populism in society, Casebere presented an exhibition in homage to Luis Barragán: an architectural ensemble paying tribute to a sense of spirituality. With this new work, On the Water’s Edge, he sets his sights on the future with a series of novel hybrid structures, skilfully combining public spaces and private sanctuaries in coastal regions as he adopts a critical yet optimistic approach to the current disasters caused by rising sea levels.

For the new show, the artist chose not to work with existing structures but to create new composite ensembles from scratch, their unfinished appearance turning them into sanctuaries of peace where every refugee can find refuge. Each photograph is the fruit of a painstaking working process in the studio: he starts by building scale models inspired by a plethora of architectural forms and finishes by designing complex lighting, colouring and image production inspired by his personal memories.

Although the structures tend to be abstract, they offer a contemporary take on an ideal lifestyle in perfect synergy with nature, much like Paul Rudolph’s Florida houses and the early 20th-century Arts and Crafts movement. A garden of Eden in a world on the brink of collapse is a recurring element in the artist’s work.

With these homes and pavilions solidly anchored in the midst of flooded landscapes, the artist explores a surprising dichotomy whereby humans are seen to be vulnerable to nature but remarkable in their efforts to tackle her challenges.

Born in 1953 in Michigan, USA, James Casebere lives and works in New York. Rooted in his love of architecture and nourished by cinematographic sources, James Casebere’s pioneering work has, for the past twenty-five years, placed him at the forefront of artists working with constructed photography, staged works whose other prominent exponents include Jeff Wall and Gregory Crewdson. Recent exhibitions include the Fugitive retrospective at Haus Der Kunst (Munich) and After Scale Model: Dwelling in the Work of James Casebere, BOZAR (Brussels) in 2016. His work can be seen in many major museums, including the Museum of Modern Art, Solomon R. Guggenheim Museum and Metropolitan Museum in New York, and the Victoria and Albert Museum and Tate Modern in London.

James Casebere : On the Water’s Edge