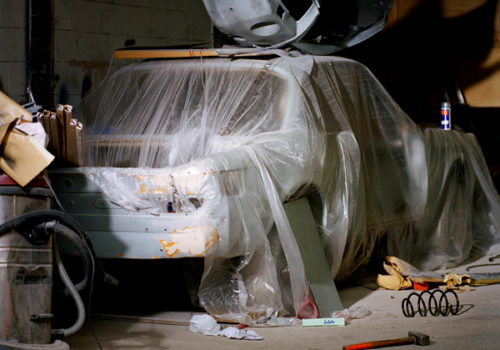 For her Garage Stills project, Jacquie Maria Wessels is looking for classic car repair garages all over the world. She is fascinated and intrigued by the shapes and colours of the mysterious, to her completely unknown objects she discovers in this wonderful world. With the found attributes she creates still lifes on the spot, which she captures with an analogue camera. By extracting the objects from their everyday context and arranging them in a completely new way, Wessels gives them a totally different dimension in her surprising compositions.

Wessels approaches this series with her documentary background in mind, however in this male dominated world of rough-around-the-edges garages she takes the liberty to move objects or to remove them and to highlight her staged still life. In the interiors of the old garages she stages her newly discovered materials into a collage-like image. The still lifes that arise subsequently are remarkable in terms of colour and an often playful beauty.

Because of science and technical development, cars have developed into computer-controlled machines. As a result, the former ‘personal and organized chaos’ in the garages is being replaced by sterile order, as a result of which contemporary garages increasingly start to resemble scientific laboratories. The traditional garages where manual labour is still central are slowly dying out. In the Garage Stills series you can feel the presence of the mechanics even though they are not in the picture, the atmosphere and the hustle and bustle of their working environment are frozen in a fixed picture. The old garages, which previously stood for progress and are now being overtaken by new technologies, have been recorded in this series before they will disappear.

Slowly Wessels also began to capture the garages’ environment by looking for the meagre bits of nature in the immediate vicinity. With the intensive work in the garages, Wessels looked forward to nature in the long run – the counterpart of the car industry, which in some places even slowly takes over the old garages.

Jacquie Maria Wessels lives and works in Amsterdam and studied photography at the Gerrit Rietveld Academy and Social Psychology at the Vrije Universiteit, both in Amsterdam. Wessels has developed into an autonomous/documentary photographer who likes to explore a topic for a longer period of time. Her subjects often serve as a framework for investigating the various social conditions and the environment of people.

A book will shortly be published on the Garage Stills series.