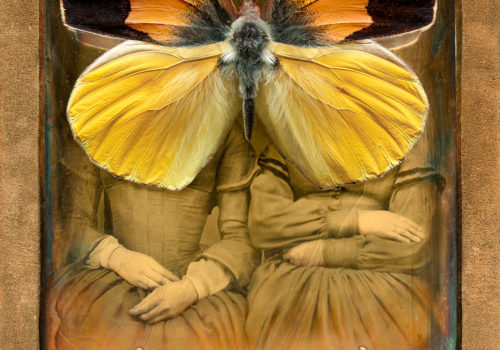 Jo Whaley has lifelong roots in the San Francisco Bay Area, having earned advanced degrees in Art and Photography from the University of California, Berkeley by 1980. Whaley originally studied to become a painter and later took a position as a scenic artist for the San Francisco Opera and other Bay Area theatrical companies. Her theater experience openly informs her photography, in which she creates stage sets and employs numerous props, painted backdrops and dramatic lighting. All of her photographic series fuse the language of photography with the language of painting and rely on an expressive use of color. Working in discrete series, the subject matter of her photographs over the last 25 years have ranged from allegorical nudes, to a revision of the “vanitas” still life tradition, to a fusion of natural history and environmental issues in the The Theater of Insects portfolio.

Widely exhibited, her work is held in the permanent collections of many museums, including the Los Angeles County Museum of Art, the Philadelphia Museum of Art and the San Francisco Museum of Art. Her touring exhibit “The Theater of Insects” opened at the National Academy of Sciences, Washington, DC in the fall of 2008, followed by the Museum of Photographic Arts, San Diego. It has continually toured to museums and most recently; the exhibit was at The Henry Fox Talbot Museum, Lacock Abbey, UK. A monograph, “The Theater of Insects” was published by Chronicle Books in conjunction with the exhibition. Whaley received one of the last National Endowment Visual Artists Fellowships in 1994 for her “NaturaMorta” series. She received numerous grants to work with the Polaroid 20×24 camera in New York between 1989 and 1993 for her series of nudes, entitled “Global Folly.” She keeps studios in Santa Fe, NM and Berkeley, CA where she continues to produce exciting new imagery.

Sara Tasini: What first drew you to photography and what keeps you there?

Jo Whaley: In painting, every stroke is injected with the artist’s personality. What I found interesting about photography was that I could create images that were “artistically neutral.” I was looking for an anonymous quality in my work, which placed the focus on the image and not the artist.

Why was it important for you to create “artistically neutral” work?

I thought that my personality was not important, and that the work should be about the vision. I aim to hold up a mirror to our time period. I wanted a quiet, distilled image, where emotion was subtle.

You also studied painting. Why did you choose to compose your still life and insect studies using photography and not painting or another medium?

Photography is the only still medium in which one can get closest to describing what is actually seen. Yet, I am still seeking a “suspension of disbelief” in my images, which means that I am creating a realistic image of something that is not actually real, but rather imaginary. Much like in the theater. The entire image is a construction.

Do you, or have you ever, looked to other photographers or artists for inspiration or education?

For any project I’m working on, I keep a notebook that includes art references to the project. I collect images from art magazines and art history books . I also write ideas centered on philosophy and technique and sketch ideas for images. I think that it is very important to have a reference of art history across all time periods and media in order to build a well-rounded awareness. I find inspiration in all places. What I am doing is synthesizing my own life experiences while holding this inspiration in my peripheral vision.

“Theater is a lie that tells the truth.” Could you elaborate on this statement you made?

This is a common saying at the core of the theatrical world. What it means is that you can say things in the theater that you could get ‘hung for’ in real life, but what you’re saying is really the truth. For example, Moliere’s Tartuffe and Mozart’s Marriage of Figaro both express controversial ideas that would not have been tolerated during their time, had they not be presented as fiction.

How has your work in theater production informed your work as a photographer, both technically and semantically?

Well, conceptually, my work parallels the theatrical ideas of blending fiction with reality and the suspension of disbelief. Technically, the theater is where I learned how to experiment with the play of light and colored filters. I would watch the lighting engineers work on the set. The theater was so important to me in how I think. By just working there for some years as a scenic painter, I was able to soak up it’s lessons.

After the great success of your last exhibition, do you have any upcoming projects?

I’m actually about to begin a new project. I have access to the Scottish Rite Temple in Santa Fe, which has theatrical backdrops preserved from 1912. Instead of building my own sets, I am going to use these original ones to shoot still life and figurative images.

You say that you appreciate the aesthetic principles of wabi-sabi, a Japanese teaching which values the beauty of decaying objects because they symbolize life’s natural course, as opposed to traditional Greek and Roman ideals of beauty which cherish even proportions and golden ratios. However, as you were trained in Western art school, do you ever find yourself relying on those Greek and Roman traditions when it comes to things like composition?

I feel that I blend the two traditions. My perspective of composition is definitely reflected in the Greco-Roman style. But I look to the Eastern traditions when implementing asymmetry and the void. The void is a place where the mind can quiet itself and go to rest in an image. As far as the use of decaying objects, a Japanese boyfriend of mine said to me, “each object, with time, becomes its own spirit,” and that is what really sparked my interest in wabi-sabi. I used the decaying textures in the insect work to underscore the fleeting nature of life and for that uniqueness which comes to each object as it dematerializes.

Why do insects fascinate you so much?

As with all aspects of nature, their colors, structures, and designs are a marvel and an inspiration I happened to have a collection of insects that I used in the still life work and decided one day that they would make wonderful subject matter. With some insects the visual designs on their bodies serve a purpose for camouflage and mimicry. How these designs are meant to interact with their environment fascinates me. In the sets, I changed their environment, but used the concept of mimicry in many of the images.

I also looked to Dutch still life painting and those artists’ use of insects as a metaphor for the ephemeral nature of life. The insects are always eating fruit and matter in decay; they help with the decomposition process and are important for that reason.

You write, “In the photographs, the natural specimens are combined with the detritus of our manufacture to mirror my observations of the limbo between the natural habitat and the one we have altered, sometimes beyond the point of recognition.” Why do you feel it is important to dedicate a body of work to this issue?

Insects are overlooked as an artistic subject, but in this work, they represent all of nature. I decided to use something small and relatively unnoticed to subtly pose questions about the very large and important issue that is climate change and our role in it as a culture.

Do you have certain pictures that you’d call your “favorites,” or ones that are very meaningful to you?

I have definitely bonded with some over others, and that also changes with time.

What do you hope people appreciate when they look at your pictures?
I just want them to have a visual, sensual experience, where I’m triggering some emotions and thoughts that well up and wash over them.

This interview is part of a series conducted by Holden Luntz Gallery, based in Palm Beach, Florida.