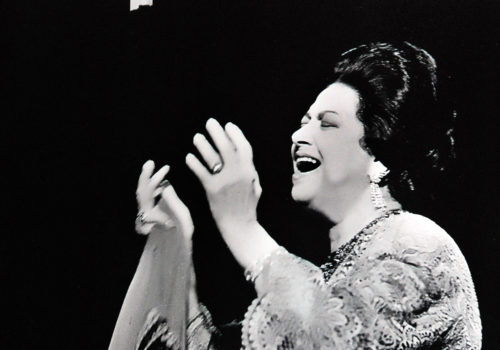 The Institut du monde arabe pays a unique tribute to the greatest women artists in music and cinema from the 20th century in the Arab world, with an event exhibition that celebrates both their history and contemporary heritage.

Divas, from Um Kalthoum to Dalida paints epic and amazing portraits of divas from the “golden age” of Arab song and cinema, through a journey filled with period photographs, often unpublished films, extracts from legendary films or concerts, cinematographic posters with glamorous graphics, magnificent dresses for the stage, personal items and rare interviews.

From Oum Kalthoum to Warda al-Djazaïria, from Asmahan to Fayrouz, from Laila Mourad to Samia Gamal, via Souad Hosni, Sabah without forgetting the very young Dalida, the exhibition is intended to be a fabulous journey to the heart of the lives and of the art of these legendary singers and actresses, but also an exploration of the profound changes they have brought about.

Timeless icons, powerful women, worshiped symbols in post-war Arab societies, these divas with exceptional careers imposed themselves from Cairo to Beirut, from the Maghreb to Paris, embodying a period of artistic and intellectual effervescence, a new image of women, as well as the national political renewal which was expressed from the beginning of the 1920s, particularly in Egypt, until the 1970s. The exhibition thus highlights, through these divas, the social history of Arab women and the birth of feminism within these patriarchal societies, their participation in pan-Arabism and the struggles for independence in the contexts of colonization and decolonization, and – above all – their central role in the various artistic fields which they helped revolutionize.

Editorial by Jack Lang, President of the IMA

On the road between Beirut and Cairo, a voice echoes. In the intimacy  of the trip, where the paths weave like ribbons adorned with sand, the driver sings a tune. It’s from a piece of Um Kalthoum. We are transported by his song, as if rocked by the soul of a people. Fairouz, Warda, Sabah, the prodigious and legendary melodies of the divas, their ardor, were the symbol of an intense artistic revolution.

The magic of these figures from the golden age of Arab music and cinema is celebrated at the IMA. To faithfully reproduce this mystical atmosphere, the exhibition opens the passage to the life, history and art of these exceptional musicians. Their lyricism arouses a soft and deep emotion, inviting to discover real cultural treasures. Heirs and heiresses of this period of artistic effervescence, always dance to their rhythm. We still sing and cry their immortal poems.

The finesse, the delicacy of these voices remain. We also remember the strength of the soul. These nightingales are fighters, pioneers. On film, the looks of Faten Hamama or the frenzied dances of Hind Rostom, Samia Gamal and Tahiyya Karioka would not have been possible without the struggles to obtain place and status. They proclaimed their hymns to freedom!

Issues of women’s freedom in the Arab world are often the subject of shortcuts and confusions. This exhibition then appeared to me necessary and essential. Let the artists, researchers and intellectuals express themselves, put words and concepts on the subject.

The art, the talent, the power of these divas, allowed them to reach a posture on the border of the sacred. They know how to excite and galvanize the public, to amaze them, to lead them to the pinnacle of emotion. Showing a new genre, at once majestic, free and poetic, they are emancipated and committed women.

Dalida, Warda, Fairouz or even Faten Hamama, these divine divas, iconic goddesses I admire them! I have been extremely fortunate to attend such memorable concerts as Oum Kalthoum’s in Cairo.

I still abandon myself to this refined, heavenly and enchanted world, between flights, dreams and whispers.

It is therefore to admirers, to music lovers, the curious, enamored of this fabulous, transcendent universe, eager to be immersed in this light, that this exhibition is dedicated.