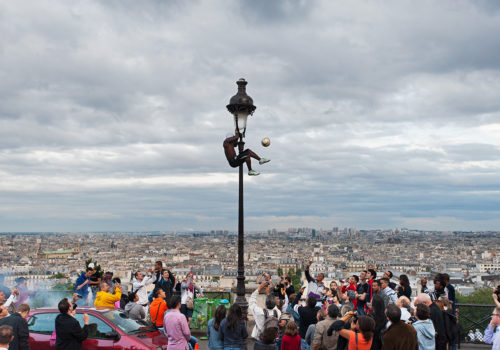 David Bacher : A Tale of Two Cities by Carole Naggar

The history of photographers’ movements between New York and Paris dates back to the 1950s, when many American artists and intellectuals resigned themselves to exile to flee the prevailing narrow-mindedness, and the blindness of political repression during McCarthysm.

Among those who worked in Paris and New York, there is Louis Stettner, with his Rolleicord images full of tenderness, empathy and spirituality. Their composition is classic and their sensitivity comes from the European school, especially from Brassaï’s photos, his mentor with whom he spent much time over the years. In contrast, William Klein throws his images in our faces like sharp lashes. Influenced by the aesthetics of the New York Daily News, he is one of the first to use techniques such as ‘out of focus’ and described himself as “a pseudo ethnographer in search of the most raw snapshots, the zero degree of photography … [I would like] to photograph a wedding like a riot, a demonstration like a family portrait”.

David Bacher’s aesthetics, inheriting this tradition, lie somewhere between Stettner’s calm spirituality and Klein’s post-modernist provocation. His work also allows us to measure the physical and spiritual distance that separates the fifties from our present time.

Fifteen years ago, this American living in Paris and in Nantes decided to take mirror images of Paris and New York. In doing so, he realized that for him “Paris and New York are like two theater sets with thousands of actors without predefined roles”.

Unlike Cartier-Bresson, who in ‘America in Passing’ chose a critical point of view to observe America in crisis, Bacher does not openly worry about politics. His vision is no longer that of “the decisive moment”: he could agree with Klein, for whom “every moment is decisive”. His fluid gaze reflects the chaos of appearances without staging it. As in the set of Palladio’s Teatro Olimpico in Vicenza, Bacher likes to create optical illusions. He jostles perspectives, giving reflections and shadows a presence as real as that of the bodies and faces which inhabit the theater of his work, the streets. Mirrors and store windows help to blur the view.

On the white habits of nuns in a procession, their shadows are projected as onto a screen, and create a second ghostly procession. A gigantic baby doll seems to escape from a window and float, flying by cars and pedestrians. The shadow of an elderly lady walking in a cemetery is cast onto a stone monument that seems to want to seize it. In the fuzzy foreground, the fence around a handball court doubles up and is projected like a tattoo on the face of a player taking a break. Displayed on a wall in the Chinatown neighborhood of Flushing, Queens, a reproduction of the Mona Lisa comes to life and mingles with the reflection of brick buildings, power lines, and the sky. A passing plane is about to land and her thoughtful gaze seems to follow its path.

While not openly political, Bacher excels in indirect and subtle social commentary, and captures the incongruities and contradictions of everyday life, especially interracial and cultural differences: a street portraitist, for example, gives her model, a young black woman with curly hair, the appearance of an idealized white woman with light brown eyes, a Roman nose and a thin mouth: she does not see the one facing her. On the Trocadero esplanade, a black man, perhaps an undocumented immigrant, sells a garland of miniature Eiffel Towers to tourists. In the background of these trinkets stands the ‘real’ illuminated silhouette of the monument. “Less pain, more lightness” promises the billboard of a Parisian pharmacy in front of which an elderly lady, clutching her shopping trolley, seems on the verge of stumbling.

Bacher’s images also reflect the confusion of appearances, as if the two capitals were slipping into each other, each borrowing the qualities of the other and gradually losing their characteristics to become a third hybrid reality combining signs of modernity: the acceleration of the pace of everyday life, the erasing of history in favor of a similar urban architecture, a mixture of races and religions (Paris becoming a ‘melting pot’ like New York has been for a long time), the emergence of a new range of strident and more artificial colors, the change of gestures on the streets which have become more expressive and more extreme: Jogging is now more common than strolling.

In the absence of captions, it is sometimes difficult to identify the city where a photo was taken, especially since Bacher, in his peregrinations, avoids monuments and famous tourist places. Only a few indications (New York’s yellow taxis, the writing on the awning of a café, green garbage dumpsters in the city of Paris, the typography of street signs, blue enameled or white on a green background depending on the city, an American flag wrapped around its pole in a park, the silhouette of the Empire State Building) in the background of a photo are hinting at the place. Bacher likes to play with this confusion and it’s a bit like asking the viewer to follow his tracks and get involved in a game of discoveries and riddles with some symbols to guide him or her.

But sometimes our questions remain, and it is impossible to know where a photo was taken: this image, for example, of a young girl who is spray painting a portrait in neon colors on a wall could have been taken in Paris or in New York; likewise those of the two small fox terriers in brown knitwear sitting at the feet of their master ‒ perhaps a tribute to Elliott Erwitt, another American photographer who often photographed in Paris?

Bacher is not judgmental. His gaze is full of indulgence, humor and kindness: for example in the heart of Paris he photographs an American hot dog restaurant ‒ some letters of the neon sign are erased. Under the fall foliage of the Luxembourg Gardens, he captures the cast bronze miniature version of the Statue of Liberty (Bartholdi’s original was offered to America by the French people to symbolize Franco-American friendship) and it’s a bit like taking the statue, from its pedestal on Liberty Island, on a journey back to its origins, a journey parallel to his.

What strikes me most about David Bacher’s photos is his use of color and contrasts, which often evokes Alex Webb’s photographs in Mexico. Like Webb, Bacher almost always prefers to photograph in full sun. From sparkling whites to vibrant blacks through all natural or neon hues, its range includes bright yellows, intense reds, pure indigos, greens, oranges and purples; this use of colors projects a sense of dynamics, joy of life and a constantly renewed wonder at what daily life in the streets can offer to his eyes. The constant comings and goings of the traveler allow him to keep his curiosity alive.

In the end, David Bacher’s images bring me back to this essential question: Who am I, me who is looking, and who, like this photographer, travels regularly between Paris and New York? Do I perceive differences between my two cities only because my eyes are blurred by the contrary filters of hope and nostalgia?

And what if, in this back and forth between the two cities, I had lost my identity without acquiring a new one? What if I had become like the metal sphere of a pinball machine, rolling endlessly back and forth across the ocean? And what if Paris and New York had both become world cities, with little to differentiate them? And what if time had erased their differences and the two cities no longer had a distinct essence? And what if traveling did not make sense anymore? And what if the colors and chaos of modernity had invaded everything? What if past and history were now submerged in this indistinct flow we call present?

David Bacher knows how to ask these questions, among many others, and how to leave them open.

Opening on Saturday May 7 from 4 p.m. in the presence of David Bacher