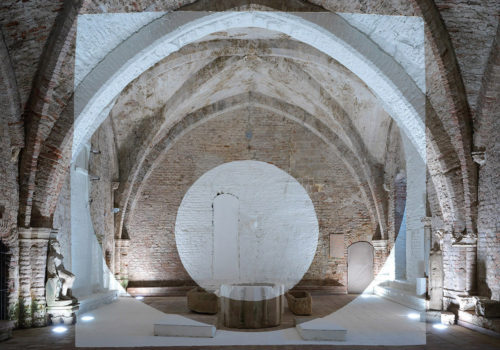 Like him, he always starts with scouting, he wanders in search of buildings he could invest. Then he draws plans, and considers a method of action; Georges Rousse is a burglar.

One of the last places he visited is the Ingres-Bourdelle museum in Montauban. Taking advantage of the reopening of the institution, following its renovation, and the request of its director Florence Viguier-Dutheil, the artist has set his sights on the majestic Black Prince room.

When ideas arise, he decides to enter through the cracks in the place, and comes to live in them. He finds faults in spaces and appropriates their stories through geometric or light links. He seeks confrontation, but without breaking in.

“White should be reserved for those light occasions, for those glares that determine the effect of the painting. “

This quote from Jean-Auguste-Dominique Ingres, Georges Rousse could make it his own, as it seems to have been written for his ephemeral Montalbanese installation.

Located in the basement, when you enter through the exhibition halls, it is at the end of a long staircase that one would think lead to catacombs, that his work emerges.

Dominated by the monumental vaults, the decrepit walls of the room respond to the geometric flat, now well recognizable, of the plastic artist.

The moment that exists between his arrival and his departure is a matter of contemplative meditation and the places find themselves reinvested, redrawn without even having been transformed.

Like the daylight that animates it, the work will in turn disappear after the exhibition ends. In agreement with the museum’s curators, Georges Rousse deposited his painting using a removable support. We will sometimes find signs of his passage, watercolors of previews of his work, a photograph taken by himself, or, by any visitor who positions himself in the right place to see the evidence of this space revealed. But if not, he will leave without leaving a trace. The room of the Black Prince of the Ingres-Bourdelle museum will then be in the hands of a new artist-burglar.

Georges Rousse, Espace, Couleur, Epiphanie at the Ingres-Bourdelle museum in Montauban, until June 2022