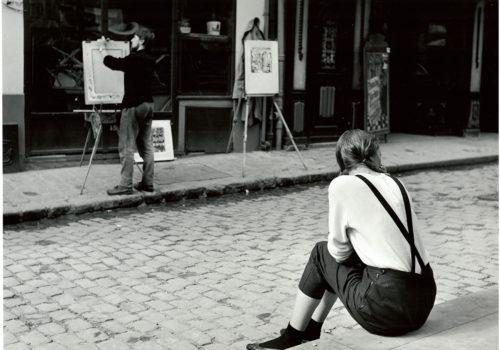 Roberto Spampinato was one of the post-war Italian photographers who documented Italy’s socioeconomical condition in the mid-twentieth century and its birth as a democratic nation. He captured the faces and scenes of a nation liberated from dictatorship, in which everything was difficult and almost impossible, but nonetheless vibrated with vitality and hope.

Spampinato was born in Milan in 1924 and began to photograph in the 50s, with a precise taste for “instantaneous” photography with a Bressonian matrix. He travelled to Paris in 1953 where he took pictures that he later decided to send to the magazine Il Mondo. Mario Pannunzio, at the time the director of Il Mondo, retained twenty-seven images that he published on multiple occasions: this was the beginning of a long and fruitful collaboration. With the discretion and sobriety that distinguished him, Roberto Spampinato frequented the amateur environment and continued his activity with passion, keeping his distance from the heated diatribe of the time’s photographic clubs.

His photographs and his articles have been often published in the specialized magazine Ferrania. Spampinato also received numerous awards in national photographic competitions. His value in the art market has grown significantly over the last two decades and his works of art can be found in the prestigious collections such as the Metropolitan Museum of Art in New York, the Museum of Fine Arts in Houston, the Museum of Photographic Arts in San Diego, the National Gallery of Canada in Ottawa, the Musée Historie Carnavalet in Paris, in addition to the university collections of Lehigh University art galleries and the Haverford College Gallery in Pennsylvania.

NeoRealismo – The New Image in Italy 1932-1960, an international exhibition that has toured 16 venues in European and American institutions, includes a selection of his photographs. Enrica Viganò’s book, titled after the exhibition, was first published in Italian (ADMIRA Edizioni, 2006) and then translated into a number of languages. Currently, ADMIRA exclusively represents Spampinato’s works in collaboration with his heirs.

Latest articles of the category "Archives"

Whitewall, in the den of a modern factory