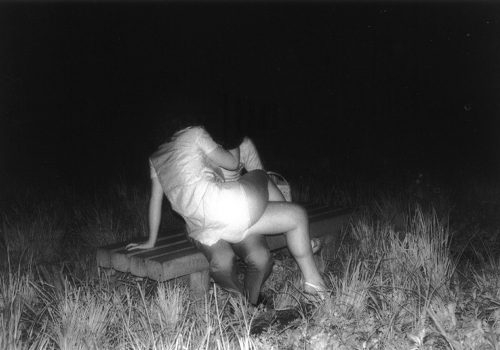 We learned of photographer Kohei Yoshiyuki’s passing from Yossi Milo Gallery. Yoshiyuki was born in the Hiroshima Prefecture in 1946 and passed away on January 21, 2022. Now beloved as one of Japan’s most important photographers, Yoshiyuki broke ground with his photographs taken in the early 1970s of couples engaged in sex acts in Tokyo’s public parks, often accompanied by voyeuristic onlookers.

In 2019, we published the following feature on the occasion of the new edition of his essential book The Park co-published by Radius Books and Yossi Milo.

Over forty years ago, Kohei Yoshiyuki positioned himself in Tokyo’s parks at night with a 35mm camera and infrared film, poised to observe and document an underground aspect of Japanese culture. Today, his images are more relevant than ever, addressing universal issues of surveillance, voyeurism, and privacy. In 1979, when the work was first shown publicly, it threw open a window onto how Japanese people saw themselves: they were both shocked and intrigued. This redesigned, anniversary edition of The Park promises to engage a new audience that may be unfamiliar with Yoshiyuki’s work, but one that is far more accustomed to observing the private lives of others.

As Martin Parr wrote in The Photobook: A History Volume II, The Park is “a brilliant piece of social documentation, capturing perfectly the loneliness, sadness and desperation that so often accompany sexual or human relationships in a big, hard metropolis like Tokyo.” The work has continued to provoke myriad reactions for decades: Is it a chronicle of Tokyo at night, when three of the city’s most famous public recreation areas would take on second lives and transform, fairytale-like, into places dark and fantastical, bristling with other people’s secrets? Or is it a revelation about a culture that, despite its flair for the fanciful and outlandish, remains relatively conservative and private? Certainly it is easy to see images from The Park as either.

This definitive new edition of The Park features eight never-before-seen images, as well as documentation of the sold-out 1980 Japanese publication, Document Koen [Document Park], that pre-dated the 2007 Hatje Cantz/Yossi Milo edition. An accompanying exhibition marking the fortieth anniversary of Kohei Yoshiyuki’s conclusion of The Park series will be held in 2020 at Yossi Milo Gallery, New York.

The Park is a unique contribution to the annals of Japanese post-war photography, capturing that brief, weird liminal period of the country’s history, its awkward adolescence between the bleak sixties, a decade of loss and defeat, and the eighties, when Japan once again seemed on the verge of ruling the world. Kohei Yoshiyuki reveals a hidden city at night, where inside the folds of darkness couples and groups are released from life’s constraints. Onlookers hiding in bushes, lovers, and off-stage participants are all caught in flagrante by his camera.

Japanese photographer Kohei Yoshiyuki (born 1946) first came to prominence with the 1979 debut of his Park photos at the Komei Gallery, Tokyo. Yoshiyuki had his premiere exhibition outside of Japan at Yossi Milo Gallery in New York in 2007, and his photos are held in numerous collections worldwide, including the Brooklyn Museum, NY; Hessel Museum of Art, Bard College, Annandale-on-Hudson, NY; the Metropolitan Museum of Art, NY; Museum of Contemporary Photography, Chicago; the Museum of Fine Arts, Houston; the Museum of Modern Art, NY; the San Francisco Museum of Modern Art; and Swedish Arts Council, Stockholm.

Nobuyoshi Araki is one of Japan’s most established photographers. Known for his controversial pictures of nude Japanese women, often involved in the art of kinbaku, Araki has published over 400 books, and has continued his signature style since the early 1970s. His work resides in some of the most significant public and private collections worldwide.

Yossi Milo is founder and owner of Yossi Milo Gallery, New York. Established in 2000, the gallery is dedicated to providing a platform for an influential community of artists working in all media, including photography, painting, drawing, sculpture and video.

Vince Aletti is a renowned curator, writer, and photography critic whose work has appeared in Rolling Stone, The Village Voice, The New Yorker, Artforum, and other publications. He has contributed to scores of photography books about artists including Richard Avedon, Saul Leiter, Peter Hujar, Ingar Krauss, Irving Penn, and David Wojnarowicz. Aletti was awarded the Infinity Award for writing by The International Center for Photography in 2005.

ABOUT THE SPECIAL EDITION

The Special Edition is limited to 500 copies and each one has been signed and numbered by Kohei Yoshiyuki. It is presented in a unique cardboard box especially created for the Special Edition, and includes a facsimile reproduction of the rare 1980 Japanese publication Document Koen [Document Park].

Includes a signed copy of the

book with a facsimile reproduction of the 1980 Japanese publication Document Koen [Document Park], offered together in a special presentation box.