in focus Galerie : Magic of Photography : Bernard of Hollywood 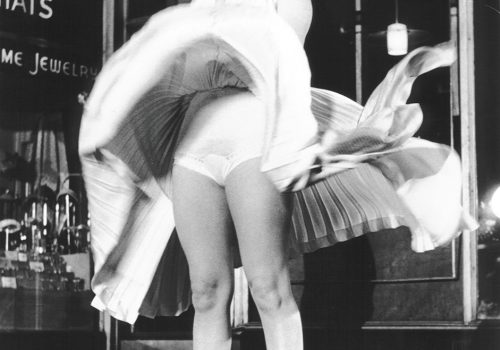 in focus Galerie will remain closed until the opening of the next exhibition with platinum-palladium prints by the great Swiss master of photography René Groebli on August 29th. In the meantime Anja Maria and Burkhard Arnold continue their series “Magic of Photography” with photographs from the gallery’s holdings. Here is Bernard of Hollywood.

Bruno Bernard or Bernard of Hollywood was born in Berlin in 1912. He died in 1987. In 1937 he had to emigrate from Nazi Germany because he was blacklisted by the Gestapo because of his commitment to the Jewish student movement. His goal was the United States. He had a dollar with him and a Rollei camera that he had got for his 11th birthday. Although he was a doctor of law, he made photography his second profession. As early as 1942, he opened his first studio on the Sunset Strip, followed by branches in Las Vegas and Palm Springs.

He photographed film legends – John Wayne, Elizabeth Taylor, Sophia Loren, Marilyn Monroe, Anita Ekberg, Clark Gable, Yul Brunner and many others. In 1984 he was the first portrait photographer to receive an Oscar from the Academy of Motion Picture Arts and Sciences. At the award, he said it was always his goal to capture “the essence” of his models. He was concerned with the personality of his beauties. His idea of ​​the perfect model was the “natural, normal American girl”.

One of his most famous shots is the photo of Marilyn Monroe, on which she stands above the ventilation duct of the subway and her white pleated skirt is blown into the air. It was created in 1954 during the filming of “The Seven Year Itch” (photo: Marilyn Monroe, flying skirt, 1954, enlarged before 1986, 24 x 18 cm, stamped in the negative, silver gelatin).

Not only actors and actresses were among his models – he also photographed strippers and show girls. He is considered the master of pin-ups. In 1950 he published a “Guide to Pin Up photography”, which was reprinted much later by Taschen Verlag. They are photos that have often been censored and are now considered works of art. The photographs that were used as a template for this book in 1950 are available as vintage prints in the gallery’s inventory alongside a selection (mostly vintage prints from the 40s and 60s) of portraits of great stars and a sensational collection of photographs by Marilyn Monroe. Bruno Bernard photographed the first cover for the magazine “Romances” in 1946 with the still unknown Norma Jean Baker – later Marilyn Monroe. Almost at the same time, Bruno Bernard enabled Norma Jean Baker to get his first film contract with FOX through his Hollywood relationships. Without a doubt, Bernard of Hollywood can be considered the discoverer of Marilyn Monroe.

Unfortunately, we never had the pleasure of getting to know Bruno Bernard personally, since he had died before the gallery was founded. But without knowing him, let us imagine that he was a very brave, resourceful and determined person who lived a full life.

Inquiries about Bernard of Hollywood’s work or an appointment can be made by phone or email to arnold@infocusgalerie.com.

in focus Galerie – B. Arnold