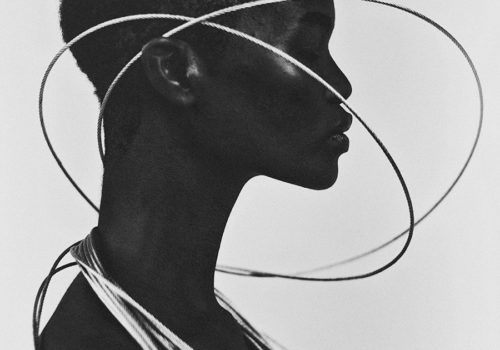 We have been following the work of this photographer, who despite no formal training, has developed his photographic expertise in just ten short years and was exhibited Musee du Louvre in 2015 and Fotographiska in 2016 and 2018. Inspired by photography from the 1950s, 60s and 70s, and the works of fashion photography masters such as Man Ray, Irving Penn and Richard Avedon, Woudt’s ‘monochrome minimalism’ creates an immediately recognizable and personal visual style. He focuses on elegant and restrained forms that almost become abstract through extreme contrasts of black and white monochromes and highly stylized definition.

We spoke to Bastiaan about his personal style and vision, his new retrospective book ‘Rhythm,’ and his spectacular expedition to mountains of Nepal.

Tell us a little bit about your new book, Rhythm, that you created during the pandemic?

I’ve used the whole pandemic to go back into my archive because I’m celebrating my ten-year anniversary this year as a photographer. I selected all the shoots and not only looked at the final results, but also went back into the shoots to see if I missed something ten years ago. I eventually came up with a selection of almost three thousand images, which was way too much. So, selection, after selection, after selection, and because I own my own publishing house [1605 Publishers] I designed the book myself, I made the selection myself, I did everything myself, so I had all the freedom to do whatever I wanted. And because we were all in lockdown it was the perfect time because it gave me enough time to make this big overview.

So, would you say that your style has evolved over the last ten years?

Yeah, it’s funny because I thought about this but it’s so hard for me to see an evolution, because for me, it’s all my work. I know all my work, so I don’t see if it’s evolving or changing, so I leave it up to the viewer of the book to see if things change. I didn’t edit it in a chronological way so it’s not like you start ten years ago and then now, so it’s hard to say. And that’s also why it’s called Rhythm, it’s so important to have rhythm inside the book, with the selection. For me, it was the most important thing to have a look at the image that is open on the table and how it is related to the next one or the previous one. So, for me, there had to be a correlation between the one you’re seeing and the one you’re about to see, that’s the only thing that mattered. So that way I could combine commercial work, commissioned work, personal work, everything. I could combine it very easily because I just looked at the image and said, ‘What’s the relation to the other image?’ and it could be textures, shapes, models, or just memory. So, it might happen that people who look at the book don’t see the correlation between every picture, but for me there’s always one.

What’s the message of your photography, do you have an intention when you take your pictures?

For work that I do in the studio, I think it is up to the viewer to decide which story is being told. For me, my images are very clear, and it doesn’t have to be that every image tells a story. Sometimes it is good for the imagination of the viewer to think of a story with the pictures.

Of course, when I do projects in other countries like when I went on a thirty-day expedition in Nepal or the project in Uganda with clean drinking water projects [in 2017], I am telling the story of this expedition, the people I met and the landscapes I saw.

I think maybe the story is the book, seeing an overview of what I did and the way I look, and that tells the story.

Can you speak a little bit more about the expedition you took to Nepal and your photographs there?

I went there with my brother, and we had this whole team because where we went, there was nothing. We stayed in tents and slept at high altitudes for thirty days. Sometimes we’d walk for four or five days without seeing a human being. For me, it was most of all about the landscapes because in essence I’m not a landscape photographer, I’m not a portrait photographer, I’m just a photographer. Most of the time I shoot in a studio, so I really wanted to do a project where the emphasis was on landscapes. But then I couldn’t resist photographing the people I met, so when we stopped at the small tea houses in the middle of nowhere, I was able to photograph the owners of the tea houses. We came across a monastery, and our guide walked in because we needed a place to stay. He asked if we could set up camp in front of the monastery and they invited us in. There were thirteen young monks, studying to be monks, who walked around in the garden doing their mantras, and it was like a crazy experience to be there in the middle of nowhere, high up in the mountains. We were allowed to stay there and eat with them inside of the monastery, and I was able to take photographs of all of these young monks. So, there were thirteen of them, and because we had all the time in the world I really could take time to make their portraits. We filmed everything as well, on my YouTube channel you can find a video about the whole trip and there you can see the shooting at the monastery as well.

Amazing. Black is a very recurring color in your work, in the sense of a very deep, very strong, very rich dark in your images, what is it in this color that you’re going after?

I don’t know, maybe it’s just part of the way that I process images and the way that I see, I really like to have a strong contrast in my images. But actually, it’s funny that you say that it’s like so black, because if you look in photoshop it’s not totally black, it’s the same as the white parts in my images are never totally white, it’s always like this middle, mid-tones, and even though it’s not exactly black, it really feels black, so it’s the way I process my images. And these are all inspired of course by analog photography, the old photography. I found a way to shoot digital, I shoot digital only, but give it this ultimate feeling of analog photography and that along with the way I have my work printed, almost on this bodied paper, it really feels like it’s analog. For me, that’s like the best thing. I even have some people ask me which film I use, so that’s, for me, the biggest compliment because I shoot digital, but I really want to give it that feeling of film.

And is there one photographer in particular that you’re inspired by?

Many actually. But for me, the photographers like Irving Penn, Richard Avedon, and Bill Brandt, these are all like, for me, the biggest examples that changed the landscape of photography. They really changed the way people looked at photography and that’s why I fell in love with photography, because of them. If I could imagine a living photographer, probably it would be Paolo Roversi. I love his work and he has the same analog feeling. He shoots analog, obviously, but also his digital work is very analog feeling.

I like more of these masters of photography, instead of the very contemporary ones now because, for me, contemporary photography is all about being almost perfectly sharp and very colorful, and that’s not the way I see. I shoot the black and white only. For me, taking away the color is also taking away a little bit of the reality. For me, it’s so important that you take away a piece of that reality because we look in color all day long. By taking away the color, it automatically becomes something else. We have the imagination of the viewer tell their story. It is probably why I would never shoot color again.