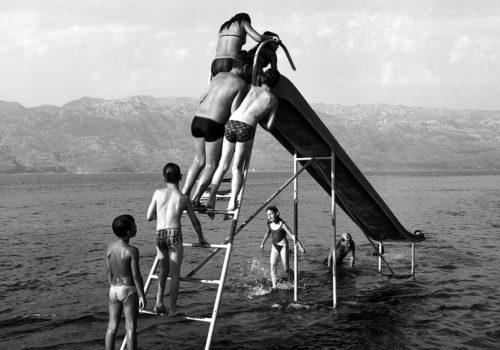 For his second exhibition at the in camera gallery, the Catalan photographer Txema Salvans guides us, as usual, through a candid journey far from any artifice.

Although there is a lot of irony in his work, Txema Salvans’ greatest concern has always been to succeed in photographing his subjects without making them look ridiculous, believing that his work has value only because it feels close to them and that he belongs to the community of those he has photographed. As proof, one of the strongest images in the series is a photo of his own family having a picnic on a Mediterranean motorway rest area. For the photographer, it is essential to show that his work has been done from the inside and that it is not a purely aesthetic and anecdotal outside look.

It is thanks to this bond and the gentleness of his gaze that Txema Salvans succeeds with My Kingdom, in creating a comforting feeling of camaraderie and absolute relaxation among his Spanish compatriots who, despite the economic troubles of their country, seem determined to relax.

The My Kingdom series – whose title is taken from a speech by the former King of Spain Juan Carlos I – seems to have a people-centered approach, but above all it has a strong political dimension. It is “dedicated to all who live with simplicity and honesty beyond the empty words of political speeches meant to imprison us, and to those who know that life is not lived behind a flag but in the brotherhood of ordinary citizens enjoying sunshine together on a hot day”.

From 2006 to 2014, Txema Salvans traveled through Catalonia to meet vacationers and decided to politicize his series. He then made his photographs dialogue with excerpts from speeches that the king gave every year at Christmas, arguing that the people photographed were precisely the same people who listened to all the speeches. These people are the “kingdom” of the king. My Kingdom aims to confront the daily life of Spaniards to the cynicism of political discourse far removed from reality.

Far from criticizing a specific character, My kingdom turns out to be a fine analysis of a system and a human trait in the form of a funny and moving testimony.

Txema Salvans is a Spanish photographer born in 1971 in Barcelona. Before turning to photography, he began studying biology; his approach rooted in reality retains a form of rigorous observation, a passionate curiosity for the living. “Sometimes I feel like an entomologist, or one of those naturalists, who in the 19th century collected and reproduced species in a perfectly objective style.”

His subject of study is what is familiar and dear to him: Spain today and the lifestyles of its inhabitants. In this context, Txema Salvans favors the relationship between man and his environment and his photographs describe the transformations of the Iberian Peninsula while incorporating a central social dimension. Its various projects, with a documentary aim, renew in depth the aesthetic codes and the practice of the genre.

The work of Txema Salvans evolves little by little from surprise and irony to a form of maturity where interaction with his characters becomes essential, and he who defines himself as resolutely optimistic likes this social role that photography allows him. In his series “The Waiting Game”, “The oldest profession in the world” would become almost anecdotal in the photos of Salvans, where the prostitutes seem lost in the background. It is precisely this setting that we conspicuously ignore when we meet these young women, and it is never brilliant: industrial areas, crossroads in open countryside, roundabouts, car parks or even dumps…

Similarly, in My Kingdom and Perfect Day, Txema Salvans photographs Spanish vacationers in unexpected corners of the post-industrial landscape. In these surreal, mundane and humorous scenes, Txema Salvans reveals how the pursuit of leisure persists despite the disturbing pressures of the built environment, expressing a deep human determination to adapt and find rest, come hell or high water. . Beneath the surface of these carefully composed tableaux lie powerful questions about class, national identity and the politics of space.

Taken from a distance, the photographs of Txema Salvans do not tend to make a judgment. They are as if in search of a neutrality where Salvans captures the behaviors adopted by these characters, fishermen, prostitutes, vacationers… in these places of passage or devoid of life, which are, like them, on the margins of society.

The photographs of Txema Salvans have been exhibited in several international public institutions and have been the subject of numerous publications. In 2005, he received the prize for the best Spanish photography book for