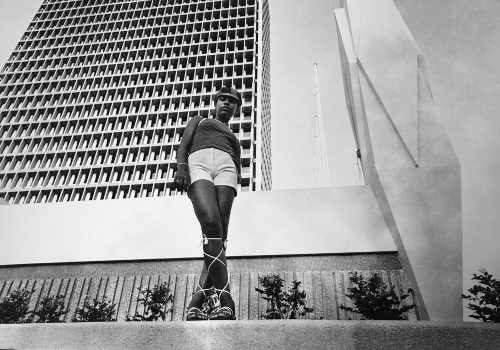 Photography dialogue between two Ivorian authors, Paul Kodjo and Ananias Léki Dago, both in search of a modern look.

Even though they belong to different generations, Paul Kodjo was born in 1939, Ananias Léki Dago in 1970, this state of mind intuitively brought these two authors together when they first met in Abidjan, in 2000. Both driven by the desire to stand out, they are rooted in this medium, and, in a way, aesthetically supported.

A sign of distinction: this black & white that they love and experience resolutely. “Our writing is not the same, notes Ananias Léki Dago, but we are from the same school, that of film. Paul has asserted himself in both the studio portrait and press reportage, he has documented the independence of our country. Its history will cross later that of France in May-68, and that of the cinema. Kodjo is a man on the move, his biography is rich in adventures, from the opening of his first studio in 1959, Hollywood Studio, in Abidjan, to his teaching at the National Institute of Arts (1975-1985). Thus, when he directs photo novels for the weekly Ivoire-Dimanche, he likes to ward off the immobility of his models by placing them in custom settings that do not overwhelm them. No affectation, no frivolities, elegant gestures, it’s about getting out of the box without resorting to artifice. It’s very successful.

Ananias Léki Dago uses framing, “an approach adopted very early on. But I do not frame by chance, it is the edge of my frame that betrays a desire to unframed “. He plays with silhouettes, backlighting, or shadows “which become masses to put them in confrontation”. He is a photographer who takes care of his subject, he is not in the touch but in the depth. This poetic witness is concerned with what he sees, in South Africa, Mali, Kenya, Benin or Ivory Coast: “I am reordering reality”. Hence the strength of his meeting with Paul Kodjo, their dialogue bore fruit. Thanks to the tenacity of Ananias Léki Dago, part of Paul Kodjo’s negatives could be saved and restored. In Abidjan as in Paris, we have rediscovered this forgotten photographer, who now appears in the collections of the Quai Branly Museum.

This recognition is a new bond, an attachment that entangles their destinies. “Paul is disconcertingly simple,” says Ananias, who is preparing a film about his older brother. “It allowed me to grow up,” he concludes, both happy with this heritage treasure, and this fertile exchange around photography, a source of light.