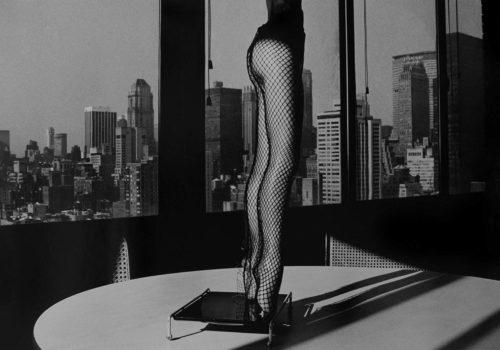 April 1973, Laurence Sackman was exhibited at the Museum of Modern Art in Paris with Gilles Bensimon, Alex Chatelain and Uli Rose. Not bad, for a boy who had landed in Paris barely a year before. With a few publications in Marie Claire, he became a star.
We published him in PHOTO that month.
I did the interview: I will never forget it.
One of the worst and most difficult; 15 sentences in an hour and a half.
To only one he had answered my question immediately and spontaneously.
His photographic influence? : Man Ray, sentence followed by: “but do not write it, he hates being called a photographer”.
For a time, Helmut Newton considered him with Chris Von Wangenheim as one of his heirs.
Thanks to Apple Sackman, Jean Noël de Soye, Alice Tremblot de La Croix, Fabienne Martin, Jean-Michel Vigier, Alain le Kim, Eric Gallais, Martin Sauve et Renate Zatsch for making this tribute possible!

In partnership with Fabienne Martin, the galerie in camera gallery lifts the veil on the work of Laurence Sackman, cult fashion photographer of the 1980s.

Laurence Sackman was born in 1948 in Wembley, a suburb of north London. He started out in photography at the age of 14, assisting still life photographer Sidney Pisan, who also practiced as a dentist. With Pisan, the young Sackman was initiated to the ring-flash that his mentor used in his medical practice and in his artistic activity. A few years later, Sackman was one of the first fashion photographers to use this type of shadow-reducing lighting.

Laurence Sackman’s contribution to photography cannot be reduced to pretty lights polished in the studio. His work, both poetic and subversive, strongly tinged with eroticism, had the imprint of a lively sensitivity. An era is reflected in it, where all daring was permitted.

His exceptional mastery and sharp gaze hatched on the cusp of the “swinging sixties”. London, the capital of pop culture, that blew a breath of freedom in art, music and fashion. Twenty years old in 1968, Sackman was part of this hedonistic youth, in full sexual liberation, eager to live in a more liberal and permissive society.

He began by photographing his relatives, his wife Rémi, his cousins. The star models of the decade posed in front of his lens: Anglo-Indian Chandrika Casali, muse of Guy Bourdin and David Bailey, the iconic Grace Jones, or Renate Zatsch, muse of Helmut Newton. Without forgetting Twiggy, emblematic model of the “swinging London”.

Laurence Sackman’s images are often transgressive. His signature was essential in magazines. He worked for Esquire, Stern, Queen, The Sunday Times, Nova, the New York Times. In Paris, the Jardin des Modes and Vogue Hommes requested him.

Friend of photographer Steve Hiett who introduced him in 1970 to Claude Brouet, editor-in-chief of Marie-Claire and to Emile Laugier, its talented artistic director, Sackman left no one indifferent. Emile Laugier remembers a young man with bright intelligent eyes, high standards, with very precise directing ideas, he knew exactly what he wanted. Alain Lekim, Laurence Sackman’s assistant for a few years, was so fascinated by the artist that he abandoned a very promising start to his career in photography to devote himself to him. The famous Paolo Roversi was his assistant. But then found Sackman “difficult to live with” but testifies “that he taught him everything”.

At that time, the name of Sackman was on everyone’s lips in the fashion microcosm. We only talked about his eccentricities, and, above all, his modernity, his inventiveness. Sackman carried out advertising campaigns for prominent brands: Saint-Laurent, Audi, De Beers.

One day, at the request of Yves Saint-Laurent himself, Sackman attended the preparatory meeting for a campaign where ideas were exchanged. What would he propose? To take pictures on the moon…

When asked about the posterity of his style, Helmut Newton saw himself with two heirs: Laurence Sackman and Chris von Wagenheim. In fact, Sackman was  the referent photographer of the 80s.

In 1983, he did his last opus, a series of nudes produced in room 65 of the Hotel La Louisiane, which became in a way his testament. According to him, the series constitutes his most successful work.

In this regard, he confided in 2017: “When I stopped photography, I felt like I had done everything I wanted to do. I had no regrets. I firmly believe that I would have repeated myself had I continued. ”

Such was Laurence Sackman, a celestial body, a comet that crossed the eighties.