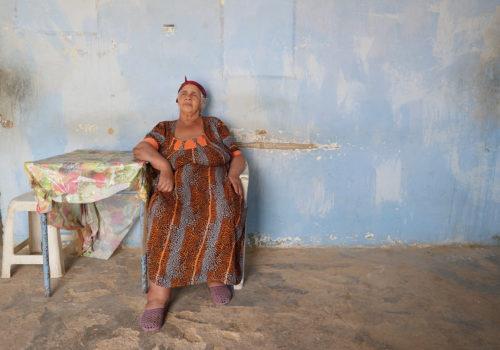 Oh watchmen! Are you not weary
of lying in wait  for the light in our salt
And the incandescence of the rose in our wound
Are you not weary, oh watchmen?
Mahmoud Darwish, State of Siege (2002)

Faced with turbulence, hotbeds of creation
It was in 2002, during a resurgence of violence aimed at suppressing the second intifada, that the great Palestinian poet Mahmoud Darwish wrote these lines in State of Siege. The twenty years that separate us from these events make them seem both distant and close at the same time, so much does the state of the world hang on the uncertain fate of the peoples of the region. When the attempts at uprising are confiscated by counter-revolutions or conflicts, the turbulence of the Arab world thus testifies to the feeling of living in a state of siege.

Hoisted on “an inclined ladder in the middle of the storm”, the artists rise like sentinels, witnesses of the present within a world of disoriented time and unstable limits. They then know how to find crossing points, invent other temporalities, rethink geographies, despite the change of scenery, exile to oneself and one’s community and socio-political upheavals.

Through the games of documentary and fiction, the works are theaters that expose the tragic consciousness of time while putting it at a distance with the right alchemy of an emancipatory plastic form. Conceived from a selection of works from the collection of the National Center for Arts (Cnap), the exhibition Les Sentinelles invites the viewer on a journey through its photographic and audiovisual collections.

Five centers of creation from the Arab world and its diaspora emerge here as so many entrances into the specific logic of works and contemporary creation.

A parallel program will give rise to screenings and encounters in Tourcoing at Fresnoy – National Studio of Contemporary Arts in partnership with the University of Lille, in Roubaix at the National Archives of the World of Work in partnership with the association Travail et Culture, in Sciences-Po Lille, at the Pernod-Ricard Foundation in Paris, as well as broadcasts on *Duuu radio.