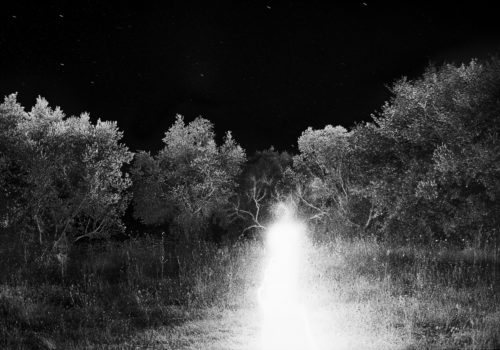 On exhibit at the Laboratorio di Cultura Fotografica “Il Forno” more than 50 black and white analogue photographs representing the profound bond between man and nature in the unique setting of the Umbrian territory.

Jean-Marc Caimi and Valentina Piccinni‘s shots evoke the polyrhythmic connection between the animal, human and plant worlds. As Italian La Sapienza University lecturer Ilaria Schiaffini writes in the exhibition catalogue: “the photographers’ reportage is not limited to an instantaneous visual impression, but passes through an unprejudiced confrontation with places and people. In the images, the landscape is rarely untouched: even images of woods and bushes reveal human intervention or recall the photographer’s presence.

“Therefore, all visible things do not perish altogether, for one thing from another nature recreates, and let none be born except from the death of another”. – Tito Lucrezio Caro De rerum natura (vv. 262-264)

There are connections between all forms of life, points of intersection that allow us to perceive the synchrony and diachrony between the animal, human and plant worlds. There are timelines that, although following cycles of different lengths, meet in the here and now, in the dimension of the present.
This photographic work seeks to explore the polyrhythmic nature of life cycles, their interaction to momentarily overlap and then recede again. This research triggers a short- circuit between the slow and apparently suspended cycle of ancestral nature and the more obvious transience of man, and invites reflection on the perception of change, birth and death. At the centre of this visual investigation is a territory, the region of Umbria (Italy), where time seems to have its deepest roots. A severe, sweet, fair, fertile and revealing land, of uncontaminated woods and centuries-old people, where it is possible to perceive the now rare original balance, where “nothing originates from nothing” and the echo of the ancestors still propagates.

Jean-Marc Caimi and Valentina Piccinni are a duo of photographers focused on contemporary stories. Their personal involvement and their unfiltered approach to documentary photography, with particular attention to the human stories, has led to the international recognition of their work. They have received several awards such as the Sony World Photography Award in the “Discovery” category, the Gomma Grant for best black and white documentary work, the PHmuseum of Humanity Award 2020 and many others. Six of their projects have been published in book form over the past five years and have been exhibited at festivals and galleries, including the Biennale Für Aktuelle Fotografie (Mannheim) and Voies Off in France. With their book “Güle Güle”, published by André Frère Éditions, they were finalists for the “Prix du livre d’auteur” d’Arles 2020 and the Prix Nadar.

The catalogue Umana Natura is on sale at the bookshop of Laboratorio di Cultura Fotografica “Il Forno”.