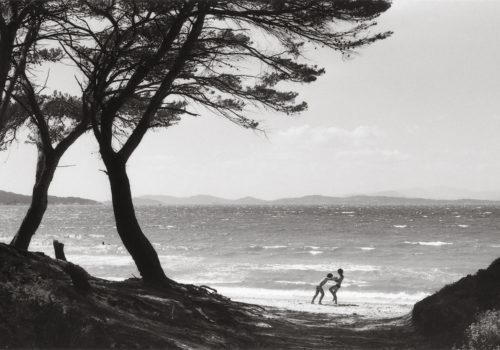 Rare and generous artist of French photography, poet of the daily, Bernard Plossu has been rubbing shoulders with the town of Hyères since the 1960s. He likes to photograph this city that is both rural, urban, coastal and an island. Its strange beauty, its landscapes between land and sea under the clear sky of Provence fascinates him. The Bank, Museum of Cultures and Landscape presents 110 photographs of Plossu through two themes that make the history and identity of the city: The gardens and the islands. With a 50 mm lens, adept at black and white or Fresson process, unique for its intense colors and matte finish, Bernard Plossu wandered with his camera through the islands that he appreciates so much and the Hyères gardens. The landscapes of Provence and their light are then sublimated, testifying to the special link that unites Plossu to the city of Hyères.

It is with a curious look and great sensitivity that the gardens of the city d’Hyères were photographed by Bernard Plossu in 2021. This series of a fifty photographs exhibited today, is the result of an assignment and several afternoons spent by the photographer surveying the small streets, to meet the inhabitants and to be surprised by nature and the typical landscapes of a Mediterranean city.
From Sainte-Claire park, via Saint-Bernard park, or the park Olbius Riquier and the garden of the La Banque museum, black and white photographs makes it possible to restore their simple beauty to the familiar spaces of the city and to their lush and calm vegetation. The old town is also immortalized under his lens, as if time had stopped on the ancient medieval city.

“A material imagination informs our reverie when we contemplate what makes up the garden. It is indeed the matter that dreams in us, the sun that projects itself behind our eyes, the water that bathes our pupils, the earth which diffuses its sap in our body. But we don’t necessarily realize this. For we need some time out of our daily life, a suspended time which is precisely that of the garden where our senses unconscious of themselves open up to the vast world concentrated in a flower, in a blade of grass, in the song of a bird. This is what Bernard Plossu captures in the stopped movement of a peacock or in the eye of a bird watching us while staring at something far away.”

The islands: Porquerolles and Port-Cros

“The most famous of the Golden Islands, Porquerolles is also the largest with an area of ​​almost 13 km, and the most populated. Unique in its kind, known for its turquoise waters, its fine sandy beaches, its attraction is obvious to tourists.

The photographs of the island exhibited here are in black and white, inseparable from the work of Plossu. It is thanks to this specific treatment that we can discover Porquerolles in a  different way, far from postcards. It was in 1963, during Easter, that Plossu visited the island of Hyères for the first time. For the photographer, it was an “immediate love at first sight for the vegetation, the Mediterranean smells, small paths”, and he adds “heaven must look like this”.

“Here in Porquerolles, no more animals but only humans, children on the beach, a man alone, seated on a terrace in front of a house with closed shutters, sailor caps on their heads, a group of men in a cafe around a table facing the sea who seem to be playing cards. Of the presences that strangely punctuate these places saturated with light and from which despite everything, the impression of loneliness emanates almost as strongly as in the gardens that we have just left, as if the sight of the porthole through which we sees the island in the distance indicated to us from the outset that we are invited to see from a distance.”