Hunter Barnes : Outside of Life 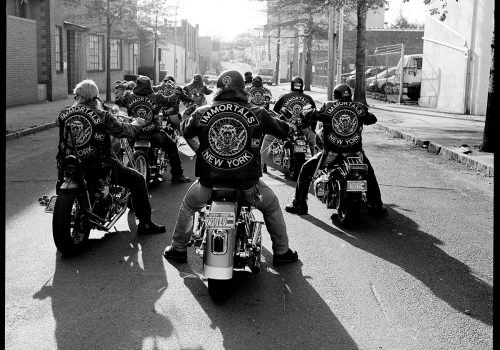 Hunter Barnes is one of the foremost documentary photographers working today. Barnes is known for his extraordinary ability to depict cultures and communities so often misunderstood by the American mainstream. The David Hill Gallery in London will present Outside of Life: Lowriders, Coolers, Bikers and Bloods , a solo exhibition offering a unique insight into the periphery of modern American narrative.

Hunter Barnes spent a fascinating year travelling the USA in 2003, documenting the individuals on the fringe of society that he met along the way including lowriders, bikers, Bloods and prison inmates. Accepted into the worlds of these individuals, Hunter gained their trust with time and understanding. Immersed in the world of the motorcycle clubs in New York, Hunter also rode through the deserts of New Mexico with lowrider car clubs, was accepted by Bloods in East St. Louis and was granted access to California’s maximum-security prison system. In his words, “From the ones who let me in, this is a glimpse into a life rarely seen.”

“True characters in life who live what they know on their own terms… Looking back at this chapter of my life, fifteen years later I see a phase that helped me grow. A new found respect for so many things, seeing people as people, and the importance of showing light in the lives of people that I was invited in to. A new beginning at a certain point of life, in that moment of time, one journey leading to another, which I am thankful I can share.” Hunter Barnes

Images from Outside of Life were first shown in Brooklyn in 2004 and as part of the second exhibition of Hunter Barnes’ photography. To coincide with the 2004 show, Barnes self-published a book of the same title, producing 1,000 copies, which were only available at the exhibition and a subsequent book signing event. Remaining copies of the Outside of Life book then went into storage and were only recently rediscovered, fifteen years later. Outside of Life contains images of eleven lowriders, nine bikers, eight coolers and thirteen Bloods. Cover artwork is by David Lundquist, of Eagle Eye Studios. A limited quantity of signed and numbered vintage copies of Outside of Life are available from David Hill Gallery, priced at £50.

Outside of Life: Lowriders, Coolers, Bikers and Bloods by Hunter Barnes