Hollywood Royale: Out of the School of Los Angeles 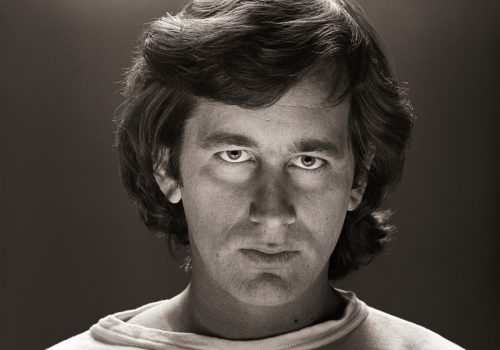 Hollywood photographer Matthew Rolston has published several books of his work over the last few years. Now comes his latest production, Hollywood Royale : Out of the School of Los Angeles. This beautifully-produced 270-page coffee table book, from teNeues of Germany, is a retrospective of this influential artist’s work and centers on his editorial photography from the 1980s.

Rolston is a member of an elite group of American photographers that emerged from the 1980s magazine scene, a group that includes such well-known photographers as Greg Gorman, Annie Leibovitz, Steven Meisel, Herb Ritts, and Bruce Weber, among others.

One of the common traits between these diverse artists was a profound desire to idealize their celebrity subjects, and to use, in a postmodern sense, imagery and iconography of the past in order to comment on the present, the “present” being, of course, the celebrity-obsessed culture of the 1980s. It is, in fact, this very obsession which has led to the celebrity and glamour-drenched culture with which we live today.

Hollywood Royale includes Rolston’s portraits of some of the era’s most prominent pop stars, models, and icons, including Michael Jackson, Madonna, Prince, Cyndi Lauper, George Michael, Cindy Crawford, Christy Turlington – the list goes on. One of the hallmarks of Rolston’s work in this period was a desire to break the norms of gender presentation and to represent, sometimes with a tongue-in – cheek approach, the so-called Golden Age of Hollywood. The images are redolent with a perfume of the glamorous past.

There are three fascinating essays that open the book that go a long way towards placing Rolston’s contributions to photography in an art historical context. The first essay is by Pat Hackett, Andy Warhol’s longtime collaborator and the editor of The Andy Warhol Diaries. The second was written by noted photographic historian, and expert on the works of legendary American photographer Irving Penn, Colin Westerbeck. The third essay was written by Charles Churchward, the former design director of both American Vogue and Vanity Fair magazines and a man who is more than familiar with Matthew Rolston and the other photographers mentioned above, having commissioned and worked closely with every one of them for both of those magazines for quite a number of years.

The final affect of these essays is nothing less than to explain the origin story of Hollywood Glamour, how it became debased and discarded by the mid-1970s, only to be revived, again with postmodern style, at the hands of Andy Warhol, Helmut Newton, and the great 1930s Hollywood glamour photographer, George Hurrell, who was remarkably able to launch a kind of career “comeback” in the 1980s, thanks to the re-discovery and support of his work by Helmut Newton. The creative gauntlet thrown down by these three men was picked up by the next generation of photographers, notably among them Matthew Rolston.

More than a retrospective book, Hollywood Royale is also a significantly-sized exhibition with more than 50 large -scale prints, digitally remastered from their original negatives. The exhibition of Hollywood Royale: Out of the School of Los Angeles made its worldwide debut at Berlin’s Camera Work Photogalerie on Saturday, October 21st, and will make its U.S. debut in Los Angeles at the Fahey/Klein gallery on Friday, March 2nd, which, appropriately enough (given the book and exhibition’s title) is just two days before the 2018 Academy Awards ceremony.

The Eye of Photography spoke with Mr. Rolston.

How did the Hollywood Royale project come about?

As a photographer, I’ve always been focused on the “now” and perhaps secondarily on the future. I’ve had very little interest in my photographic past. Once it’s done, it’s done, and I move on. I never set out to be an artist, although perhaps I have become one. I set out to be a commercial photographer. I’ve always been very careful to maintain my archive, but it was far from a focus, given what was on my plate on a daily basis.

But there comes a time in everyone’s life to reflect and to look back on one’s achievements, and that time had come for me. That meant that we had to return to the physical archive, really dig through the materials, and organize it in a whole new way.

For the last twenty years or so, I’ve been working in a digital format. All of that work is a click away in our digital archive. But the work from the 1980s, all of it analog, was another story entirely.

This was an exercise in personal archeology. I don’t know what else to call it. And as we went through the materials, including the actual original prints used for the magazines, I began to realize that I had a whole other project in front of me. It was no longer just about maintaining the archive. I now understood that I could create a book, maybe even an exhibition.

I had the opportunity to show some of the images to the director of Camera Work Photogallery in Berlin, Ute Hartjen, while that gallery was exhibiting my very first dedicated fine art project – a series of monumental color portraits of ventriloquist dummies, called Talking Heads: The Vent Haven Portraits – and she expressed interest in mounting a show of the ‘80s work after only seeing a few of the images.

Following that, I met briefly with publisher Hendrik teNeues during Paris Photo in 2016, and he committed on the spot to publishing a monograph of the work.

Now, not even a year later, we have a beautiful publication and two exhibitions opening in the next few months, one of them at CAMERA WORK in Berlin opening October 21st, and the other at Fahey/Klein Gallery in Los Angeles in March of 2018.

How did you choose the images for the project?

The process of selecting the images for the project was rather lengthy and consisted of several iterative stages. First, we had to know what images there were to choose from. So we scanned a selection of the original final publication prints. That was the first step. This gave us a body of work to choose from, so we would know which negatives to digitize. We ended up selecting about twice the number of images that made it into the book. The final count for the publication was 137 images, but we digitized and retouched probably close to 300.

We also returned to the original job files and looked at all of the proof sheets and negatives, checking for outtakes that might have been overlooked, or just trying to find a fresh perspective on the assets.

How long did it take to develop the book and exhibition project, from inception to completion?

It’s been a long and winding road, and it has taken over three years to realize this project.

When and where is the book available to purchase?

Although the book’s European publication date is September 2017, it made its European debut during the exhibition at Camera Work on October 21st. The U.S. publication date is October 15, 2017. It is available through teNeues’s own website and through book-sellers and online retailers around the world.

Are there any special events planned around the book publication and the exhibition?

There will be a number of talks, book signings, interviews, and personal appearances to promote the book, above and beyond the exhibitions already mentioned. These will take place from October 2017 through March 2018.

Knowing that Hollywood Royale is a retrospective centering on your work from the 1980s, what can you tell us about your latest projects?

My latest fine art project is called Art People: The Pageant Portraits. It is a series of enormous high-resolution color prints that are portraits of the volunteer actors in an unusual tableau vivant art pageant that has taken place every summer for the last 85 years at an arts festival in Laguna Beach, California, in which famous works of art are enacted on a stage by live costumed performers. As fate would have it, this exhibition of my very latest work will open in Los Angeles at Ralph Pucci International exactly one week after the retrospective of my earliest work in Berlin, which puts me in the very curious position of presenting an exhibition that includes what is basically my earliest published work (a portrait of a very young Steven Spielberg from 1977) and my very latest work within a one-week span. Talk about a career bookend! But I will say this: the story’s not over, at least not yet…

Patricia Lanza is a digital editor for The Annenberg Space for Photography, in Los Angeles, a photo researcher, photo editor and an author in photography. She lives and works in Los Angeles, USA.