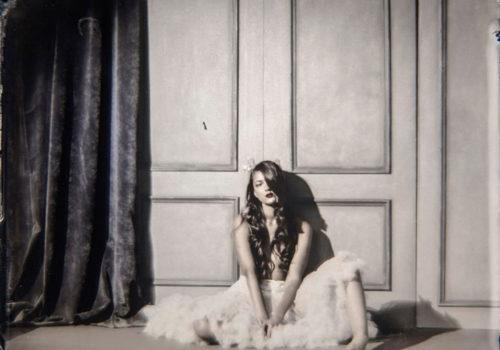 ‘How do you paint a picture of timelessness?’ reads Barbara Cole’s artist statement. ‘How do you capture the feeling of being weightless in an image?’ Barbara Cole, born in 1953 in Canada has always adopted the belief that opportunities of photography are endless. Her raw, hands on approach to the medium plays with the notions of time, place and identity. Her artistic portfolio, whether still lives, underwater subjects or the Shadow Dancing Series, intelligently combines tradition and experimentation. The timelessness aspect in Cole’s photographs come to play as she often references the past through old photographic processes such as tintype and wet collodion, while nodding to the future through various exercises in digital photography.

Having received no formal education on photography, Barbara Cole’s introduction to the medium was actually through her early experience in the world of fashion. When she was 17, Cole’s keen eye and taste caught the attention of Toronto Sun, where she worked as a fashion editor for the next 10 years. ‘And my favorite part of the job that came very naturally was the photoshoots.’ recalls Cole. ‘Every week, we chose a theme, and then you know, do a double-page spread. It was so much fun. The photographers were always asking me to compose the shot because they thought my eye was good.’  Her involvement in composing and styling a certain picture made Barbara Cole realize how much she liked creating a particular atmosphere, a photograph using costume and set couture. Gradually beginning to shoot commercial work in her own style, Cole started becoming even more intrested in the painterly qualities and possibilities of a photograph. Her biggest influences, still present to this day, remain as Sarah Moon, Paolo Roversi, Peter Lindbergh and Heinrich Kühn. ‘Sarah Moon, for instance,’ says Cole, ‘taught me that a photograph could be art. I just couldn’t believe what she could do with a camera.’ She was especially struck by Gerard Richter’s 1966 painting, Helga Matura, because opposite of Moon’s work, Richter had created a painting that looked like a photograph. Cole ultimately began shifting her practice towards an exploration of ethereal photography that takes on painterly qualities.

Following her underwater work, Barbara Cole’s curiosity in ‘creating’ a photograph resulted in her series, Shadow Dancing, in which she uses a 150 year-old photography technique: wet collodion. The series depict various scenes of models in motion, gliding through the picture, creating a beautiful, three-dimensional dance between light and shadow. Her preference in using one of the very first forms of photography allowed Cole to slow down the overall process that goes in to making a single picture, and spend a significantly longer time in the dark room. Cole almost shortens the distance between the past and the present by taking a primitive form of photographic process, and modernizing it by adding color to the tintype, creating mysterious pictures of beige, gray and brown shades. ‘When I shoot the actual picture that’s in the wet collodion film, it’s sepia.’ explains Cole when asked about the making of an image in the series. ‘Then I ask the model to stand completely still, and I take out the black and white film and I put in the color film in order to achieve the collodion background and then the color in front of the picture is front mounted to the plexiglass.’  When looked at the finished piece, the black frame , which give the layered, three dimensional effect, represents the camera. The viewer looks through the image the same way Cole would look through the image when she is shooting.

Apart from their meticulous creation processes, the Shadow Dancing Series also present the viewer deeper questions of identity. The series look into a woman’s relationship with her own past and present, as well as one’s power to embrace their alter ego. Women in Cole’s photographs are often photographed neck down, or from the side and back, without their faces being visible. Cole purposefully hides the model’s face from the spectator, as she wants the picture to almost have a mirror effect. ‘It could be your or me’ says Barbara Cole, drawing attention to ideas of self analysis and mental health throughout the series. Cole also expresses that these photographs are representations of her and her other self, her alter ego and act as emotional mirrors. Two photographs from the series for example, Past and Present, and Blue Bow, show two anonymous women, each in contact with their own shadow. This literal dance between the two selves suggests Cole’s aim to explore two opposites in one picture; person and shadow, beauty and struggle. Through Shadow Dancing, Cole aims that viewers can ‘sense the movement of time in the image’ as well as questioning their own inner world. ‘There is a certain darkness coupled with the beauty in my pictures.’ she further explains. ‘I hope that people will be attracted to that complexity. I deal with isolation, loneliness, and serenity primarily to bring people closer to recognizing their own emotional wellbeing by relating to mine. There’s tremendous strength in recognizing the darkness and self-actualizing your beauty in spite of it.’

Never one to consider herself a realist, Canadian fine art photographer Barbara Cole has always expressed that she photopraphs emotions. Her in depth knowledge of photographic equipment and dark room processes has resulted in other-worldly, ethereal series of photographs that come together under the title Shadow Dancing series. A dance between memory and dream, light and shadow, self and the other, Barbara Cole’s photographs are a testament to the power of bravely embracing one’s alter ego. Cole creates mysterious scenes of soft colors, where the model floats through the scene, presenting timeless, weightless, and painterly photographs. Currently continuing her artistic practice in Canada, Barbara Cole still explores the possibilities of the photographic medium today. Her artwork has been extensively collected by both public and private institutions, and she has won prestigious awards such as the Grand Prix at the Festival International de le Protographie de Mode in Cannes, France.