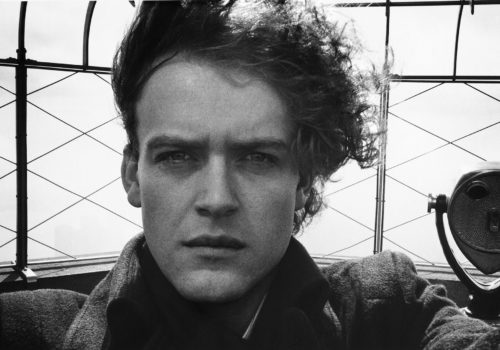 “In 1977, I was the head of the cultural department of Le Monde. An article by Hervé Guibert ran during the summer. From the Festival d’Avignon, he described his experience at the Gueuloir, it was his first article, and I noticed him.
One day in the fall, we met in a café near Le Monde, on the rue des Italiens. He wanted to work for Le Monde. I asked him if he knew anything about photography. No, he said, but it wasn’t entirely the truth. Great, I replied, you are going to try to take some notes about photography. I had a feeling he would be a revelation in our department. Pictures suited him, I could feel it from our first meeting. His presence changed something in the atmosphere, he was like an apparition. Later, he would become a family friend who would ring the doorbell on Sunday afternoons with cakes for the children.
I immediately thought he looked like a character from Pasolini, at the same time a bad boy and an angel. And a bit like Piero della Francesca’s sad angel in Arezzo. He had both the points of view of a man and a woman, always alert, noticing both the whole picture and the slightest detail. He was poetic, transformed reality, imposed his rhythm on the world. Our intimacy resembled Cézanne’s card players. His passion, writing.
I could send him anywhere, interviewing a renowned filmmaker or a dancer at the Folies-Bergère. Hervé contributed everywhere with the modesty of a true journalist. He never adapted his behavior, that was his virtue. Like poets and angels, Hervé was forever youthful. He wasn’t just beautiful, he glowed.
A few days before his death, we were drinking tea in transparent cups, pale like his face. We were talking about his death, about his final preparations, as if he were already lying on his deathbed. Like Rimbaud, he had carefully maintained his life aesthetic. Impressive, even strange, this aesthetic had pushed him to photography. In his writings, he tried to unite living and dying.
He was in motion, like Glenn Gould at his piano.
He was literary.
He loved navy blue and red socks.
His voice was slightly hoarse.
He paid as much attention to speaking as to writing.
He offered gifts, flowers, post cards, scarves, painting, he was very attentive.
He was truly a wonderful friend.”

This comment was taken from Brigitte Ollier’s “Hervé” published by Filigranes in 2011.